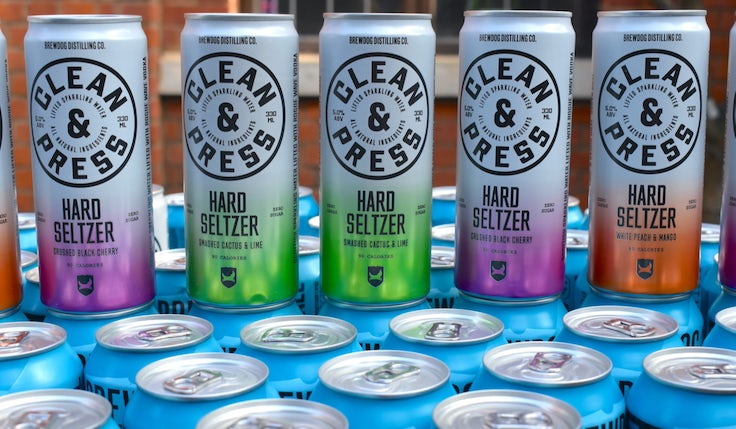 Hard seltzer brands BrewDog, DRTY and Whisp have all had adverts banned by the Advertising Standards Authority for making “misleading” and “irresponsible” health claims.

A raft of brands, including Heineken, Bud Light and Coca-Cola have recently launched hard seltzer products, which tend to be positioned as a healthier, more natural alternative to other ready-to-drink options.

While the market is still relatively new in the UK it is already big business in the US, where the category was worth $3.8bn in 2019, which is expected to rise to $10.9bn by 2027, according to Allied Research.

But while brands want to position hard seltzer as a lower calorie alternative, three players have come under fire for making unfounded health claims.

A paid-for Instagram post for BrewDog’s Clean & Press Hard Seltzer stated ‘Due to advertising regulations we cannot claim this drink is healthy’, alongside additional text which read ‘Even though Clean & Press is only 90 calories per can, with no carbs or sugar and a little bit of alcohol, this is not a health drink’.

Complainants took issue with a number of the phrases used within the ad, which despite saying it was not a health drink alluded to the fact it was. Three issues were investigated and all were upheld.

The ASA ruled using ‘no carbs or sugar’ and ‘only 90 calories’ to describe the product constituted nutritional claims, which are not permitted in relation to alcohol.

It also suggested that while brands can give factual information about the contents of alcoholic drinks they must not make any health, fitness or weight control claims. The ASA says in its ruling that consumers were being lead to believe by BrewDog that the product was in fact healthy and the issue was the brand was simply unable to communicate this fact to consumers.

The watchdog says the phrase ‘a little bit of alcohol’ was also misleading as it suggested the product was low in alcohol despite containing 5% ABV. Only products with less than 1.2% ABV can be described as low alcohol.

BrewDog defended the ad, saying it was “intended to be tongue in cheek” and has agreed not to use the claims in future campaigns.

DRTY, meanwhile, was rapped for two Instagram posts for its hard seltzer. The first showed someone playing on a fruit machine with a DRTY can in their left hand, accompanied with the caption ‘4 cans of DRTY and a scotch egg please’. The second post featured an image of several cans in a cooler with a hand reaching in, alongside the text: ‘Everyone: There’s a pandemic happening and it’s baltic [sic] outside, should probably stay in. Me: Solo DRTY’s in the garden? Don’t mind if I do’.

Both ads were deemed to “encourage excessive drinking”, while the ASA ruled the hashtags used in the first post, including #lowcalorie, #nosugardiet and #carbfree, were nutrition claims that are not permitted for alcoholic drinks.

“Although we acknowledged the ads…were light-hearted in tone, we considered that both depicted excessive drinking in a positive manner and were therefore irresponsible,” the ASA says in its ruling.

The third hard seltzer brand to fall foul of the ASA is Whisp, which is made by Wild Drinks Group. It ran into trouble for claiming on its website that ‘Whisp is a refreshing, low calorie, lightly alcoholic sparkling water – the perfect accomplice to a balanced lifestyle’.

It also highlighted the properties of on ingredient, milk thistle, calling it a ‘natural detox hero’, and claimed the drink is a ‘healthier choice’ due to it being ‘low in sugar, calories and alcohol’.

The ASA says Whisp is not “lightly alcoholic” due to having an alcoholic strength by volume of 4%, which is comparable to most lagers. Its low calorie and sugar claim is not permitted in alcoholic drinks.

In a statement to Marketing Week, the ASA says it has been making clear for years to advertisers that health claims on alcoholic beverages are prohibited.

“We’ve noticed ads for hard seltzers sometimes try to claim they are better for consumers than other alcoholic beverages, and so we’re committed to making it clear that such claims don’t follow the rules and need to stop.

“We will continue to rigorously investigate any ads that make health claims and non-permitted nutrition claims about alcohol and enforce sanctions as necessary.”