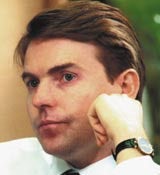 Hardie said: “Reports of the television advertising industry’s death have been greatly exaggerated.”

Hardie claimed that this negative effect will be offset by an increased viewing of advertising in multi-channel homes with advertising making up three per cent of viewing in Freeview homes and nine per cent in Sky Digital homes, compared with only two per cent in terrestrial only homes.

Research conducted by his company showed that 30 per cent of viewing for those with Sky+ is recorded viewing, compared with one per cent in Freeview and Sky Digital homes and three per cent in terrestrial homes.

The research also showed that Sky+ homes are most likely to fast forward ads when watching recorded TV. 98 per cent of ads are skipped.

Unlike Sean Brierley (MW April 22) I obviously know fuck all about advertising. I thought the Peugeot Hinjuda car ad was inspired, Egg’s glove puppet brilliant, and Orange’s hard-nosed business man original and funny. Mind you, so did all my mates. And before you say it, no, they don’t work in advertising. But they are […]

Transport authority Centro has awarded its Â£100m outdoor business to Clear Channel’s Adshel, which will have exclusive sales rights to advertising panels on West Midlands bus-shelters.