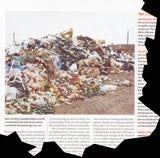 Is Tesco marketing director Tim Mason letting success go to his head? Is he no longer taking note of his chain’s image? He may have been voted top marketer in these pages last week, and his chain may be gobbling up the UK’s retail market at a rate of knots, but the Diary has noticed that Guardian Newspapers, at least, seems to have it in for Tesco.

On January 22, The Guardian ran a lengthy story about the Norfolk town of Sheringham’s battle to stave off a large Tesco store. This was followed, on January 25, by an analysis of the supermarkets’ activities in the Observer Food Monthly, with Tesco appearing prominently.

What clinched it for the Diary, though, was this pic of a tip, from a feature on recycling in the Observer Magazine. How long, precisely, did the picture editor have to spend looking for a photo of a dump covered in Tesco fruit and veg? Such a waste – surely a chain as large as that could stretch to a compost heap.

John Reid, the health secretary, has announced a White Paper to tackle issues surrounding obesity, including advertising and food labelling. It is due to be published this summer.

ITV is planning to test-market new patterns for its break junctions and is looking at putting programme promotions in the middle of the ads. If the trial goes ahead, only sponsorship bumpers and station idents will be broadcast after the end of the programme before going straight into the advertising. Subsequently, ITV will look at […]