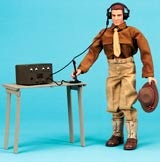 The Diary had heard that toy maker Hasbro’s latest product idea in the US aims to do for good taste what George W Bush hopes to do for the environment.

In order to cash in on – sorry, commemorate – the Japanese attack on Pearl Harbor, which has just been dramatised in a film of the same name, Hasbro has released a line of GI Joe Pearl Harbor dolls.

The Wheeler Field Army Pilot, for instance, “comes with a trophy of sorts – a tail section of one of the conquered enemy planes”.

Joe’s accessories will include the Machine Gun Pearl Harbor Figure Gear Set, which comes complete with “specialised battlefield equipment to add to the realism”.

The Diary now knows what “Dubya” will be doing with his weekends for the foreseeable future.