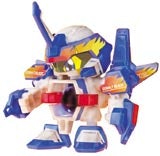 Hasbro, the toys and games company, is rolling out a heavyweight campaign for one of its biggest UK toy launches this year, the B-Daman board-game range.

The toys are being rolled out to stores this month and are to be backed by a massive integrated marketing push featuring television, online and point-of-purchase advertising. The TV ads have been adapted for the UK by DDB London.

The TV campaign will run until Christmas in an effort to build momentum for the B-Daman range. There is also a dedicated Battle B-Daman website, with a B-Daman microsite developed for the Cartoon Network.

Hasbro is launching a range of figures, accessories and a board game based on the B-Daman cartoon show, an animated “Manga-style” cartoon series that is screened on the Cartoon Network and Toonami in the UK. The range will be available in all major toy stores and high street retailers.

This weekend field marketers will visit 47 Toys R Us stores across the UK to give demonstrations on how the B-Daman games are played and encourage participation.

Hasbro senior brand manager Katreena Lines says the toys are a 21st-century spin on a the game of marbles. She says the toys are “to marbles what Beyblade was to spinning tops”. She adds that the company hopes B-Daman will repeat the success of Beyblade, which became a playground craze.