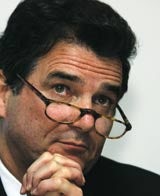 The resignation was the culmination of a long and bruising battle with French tycoon Vincent Bolloré for control of the company.

After steadily building a stake in Havas, Bolloré succeeded in having four candidates (including himself) elected to the main Havas board last week, despite relentless opposition from de Pouzilhac. Bolloré is by far the biggest shareholder, holding 22 per cent of the company. He has recently weakened de Pouzilhac further by allying himself to the second-largest shareholder, Alexander Vik, giving him control over 26 per cent of Havas.

Bolloré’s favoured candidate to succeed de Pouzilhac is Jean-Marie Dru, chairman of TBWA Worldwide and a co-founder of French agency BDDP in 1984. Dru has said he would not be interested in the post unless he had de Pouzilhac’s blessing, He is well regarded within the industry. TBWA is the world’s seventh-largest advertising network.

De Pouzilhac seems to have favoured an internal candidate to succeed him. Global executive creative director Jacques Séguéla, 71, has been touted, but ruled himself out. Other de Pouzilhac-sponsored possibilities include Stéphane Fouks, chief executive of Havas subsidiary Euro RSCG France, and Mercedes Erra, joint chairman of of Euro RSCG France.

De Pouzilhac’s connection with Havas goes back 30 years. After rising to chief executive of Havas subsidiary Havas Conseil in 1982, in 1985 he created a joint venture with Young &amp; Rubicam – Havas Conseil Marsteller Europe. In 1987 he joined the main board of Eurocom, the quoted subsidiary of Havas’ advertising interests. This was later merged with RSCG to become Euro RSCG with de Pouzilhac as chairman of the holding company, Havas Advertising, later Havas.

Bolloré began to build a stake in the company last year.

The Cyprus Tourism Organisation (CTO) is preparing to review its Â£2.3m global advertising account. The business is handled by Scholz & Friends London.

Homecall, Phones4U’s fixed-line telecoms arm, is searching for a chief marketer after Emma Dalzell quit her post. Acting managing director Tim Kirby is to take responsibility for marketing until a replacement is found.

B&Q marketing director David Roth is to leave the DIY retailer, which has been hit by a recent slowdown in sales, at the end of the year. Roth’s departure, which was tipped in Marketing Week, follows the appointment of a new chief executive, Ian Cheshire, at the retailer earlier this month (MW June 9). A […]