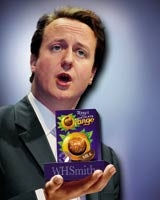 Corporate responsibility has raised its head again as new Tory leader David Cameron sets out to steal the ethics mantle from Labour and soften his party’s image. Now that it’s certain to be an election issue, shrugging off ‘good business’ principles is no longer an option. By David Benady

Just as the issue of business ethics appeared to be running out of steam, newly elected Conservative Party leader David Cameron has forced it back on to the agenda. In a speech on health policy last week, the former Carlton Communications PR man stuck a well-polished Oxford brogue into newsagent WH Smith for aggressively pushing cut-price chocolate oranges to customers. In the light of the obesity crisis, this was “irresponsible marketing”, he said.

Then, on the BBC’s Today Programme, he praised brands Nike and Sky for social initiatives such as getting young people involved in sport, calling them examples of the “best social responsibility programmes”.

Cameron is determined to make an issue out of corporate social responsibility (CSR), hoping it will provide powerful ammunition in his battle to attract floating voters put off by the Tories’ past reputation as slavish adherents to the profit motive. CSR is about how business takes account of its wider economic, social and environmental impacts, rather than just concentrating on profits. It covers everything from relationships with suppliers and workers (not exploiting them) to shareholder transparency (not ripping them off), abiding by the law and environ- mental impacts.

the devil’s in the detail

One of Cameron’s closest advisers – a member of the so-called “Notting Hill Set” – is Steve Hilton, a former M&amp;C Saatchi adman who now runs an agency called Good Business. It claims to be Europe’s leading corporate responsibility consultancy.

Some wonder why Cameron singled out Nike and Sky as shining examples of CSR. One connection could be Hilton – Good Business says on its website that it has worked with Sky. But a Sky spokesman plays down the link, saying it hasn’t worked with Good Business for “three or four years”. Hilton was unavailable for comment.

Cameron’s reference to Nike was also surprising given that the company is widely seen as a corporate offender that only engaged in CSR when it was criticised in the media for poor labour practices. Nike’s approach to CSR has been described as “reactive” and it is seen as far behind the likes of The Body Shop or even Gap on the issue. Even so, maybe its conversion to the cause of ethical business makes it noteworthy.

There is nothing like a sinner redeemed and some in the CSR industry believe Cameron is a new convert to the cause. One business ethics consultant says he came across Cameron when he was head of corporate communications at media company Carlton, which merged with Granada in 2003 to become ITV. “David wasn’t very interested in CSR, he left that to his deputies. So I was quite surprised to see he has adopted it. He had opportunities to engage in corporate responsibility programmes at Carlton, but he didn’t do so,” says the consultant.

Meanwhile, Mallen Baker, development director of Business in the Community (BITC), a CSR body supported by 700 companies,&nbsp;says he has no recollection of Carlton ever being involved with the organisation, though he adds that Granada boss Charles Allen was an active member.

Given that the CSR is usually the remit of a company’s head of communications it would have been one of Cameron’s main roles. That said, Carlton’s 2002 annual report contains an extensive CSR section, with finance director Paul Murray heading the issue.

But Cameron is now attempting to steal the CSR mantle from Labour, which has itself heavily promoted the issue. Since creating the position of Minister for CSR in 2001, there has been a succession of men responsible – Kim Howells, Douglas Alexander, Stephen Timms, Nigel Griffiths and now Malcolm Wicks. However, the Government’s CSR agenda went badly awry last month. It had spent two years preparing the ground for the introduction of compulsory social and environmental reporting by quoted companies through the Operational and Financial Review (OFR). But just before Christmas, weeks ahead of its introduction, Chancellor Gordon Brown unexpectedly axed the idea.

However, the Government has recently set up a CSR Academy to promote ethical business, and a spokesman for the Department of Trade and Industry adds CSR issues that were set to be tackled in the OFR will now be covered by the replacement Business Review. He says the new review will still require some social and environmental reporting.

Many feel that Labour may have a good record on social justice, but has failed to grasp the nettle on key issues such as the environment, transport and pollution. Cameron seems determined to step unto the breach.

Now that corporate ethics looks like becoming an election issue, business is mulling over its future strategy. Simon Propper, managing director of CSR consultancy Context, has some advice: “Marketing mythology is that CSR is about supporting charities, but really it is about how companies make their money, not how they give it away. It is about social impacts, not whether they have done a tie-up.”

So Tesco’s Computers for Schools Programme may be seen as a sales promotion dressed up as CSR, whereas oil giant BP is attempting to implant ethical behaviour throughout the company.

In many businesses, responsibility for CSR lies within the remit of the PR department, giving the impression it is perfume to cover up the bad smell of irresponsible business practices. BITC’s Baker says: “It should be the chief executive that leads CSR, never the head of PR – CSR is about how you run the business.” BP chief executive Sir John Browne has led ethical initiatives at the company. The Body Shop, Green &amp; Black’s, Toyota’s Prius and Innocent Drinks are brands created from a CSR perspective, rather than having ethics “sprayed on”.

There is a feeling that CSR’s time has come. Jonathon Hall of brand consultancy SBR says corporate interest in the issue reached a zenith in 2003 and died down in the following two years as companies retrenched due to economic uncertainties. But now they are renewing their interest in it.

Good to the core

Meanwhile, David Logan, a director of The Corporate Citizenship Company, believes CSR has reached a crucial stage and that business is moving from just supporting good causes to weaving ethics into the fabric organisations. He says: “There is quite a shift going on with companies going from the defensive to the positive. Cameron is picking up on that.” He adds that there is a move by multi-brand companies such as Unilever to spread CSR out from the corporate centre to individual brands.

With both Labour and the Conservatives promoting CSR, businesses will have to think seriously about the impacts of their activities or run the risk of being picked on, like WH Smith.â¢