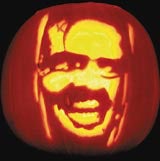 Hallowe’en comes but once a year, and with it brings teenagers threatening to let down the tyres of the Diary’s Austin Allegro if it doesn’t give them the requisite reward for wearing a “Scream” mask stolen from the local newsagents.

The staff of agency Haygarth obviously don’t share this sentiment, however, and have called a “Haygarth Creative Pumpkin Carving Competition”. Three of the entries in this year’s are pictured below. Jack Nicholson’s “Here’s Johnny” face from The Shining, Yoda of Star Wars fame, and “Skull”. Shabby and amateurish The Diary is sure you’ll agree.

The Diary’s entry, however, pictured bottom left, was cruelly robbed of its rightful first prize by the “Here’s Johnny” effort.

The Diary can only assume that the standard of its entry was so good that the judges assumed it had been touched up on PhotoShop. As if it would scoop that low…