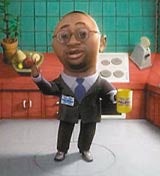 As part of a package of benefits, customers who open an account will be given free Green Flag roadside assistance and European travel insurance, as well as discounts on other insurance products for as long as the account is open.

The account, understood to be supported by a new “Howard” advertising campaign later this year, will initially be promoted in branches and through a newspaper campaign.

Last year, the combination of its advertising campaign created by Delaney Lund Knox Warren and an interest rate of three per cent helped HBoS to take 29 per cent of the new and switching standard current account market. The Extras will have an interest rate of two per cent, and will be available through both Halifax and Bank of Scotland branches.

According to Mintel, 6 million consumers have fee-based accounts, raking in &£600m a year for the banks. Barclays, Lloyds TSB, Royal Bank of Scotland and NatWest dominated the packaged current accounts market, charging up to &£150 a year in return for a wide variety of benefits, including home shopping services.

HBoS says it has no plans to diversify into other services, such as the utilities offering launched by Lloyds TSB this week, or legal services, which could soon be deregulated.

The Advertising Standards Authority has not upheld 186 complaints against an easyJet press ad which carried the headline ‘Discover weapons of mass distraction’ and featured a picture of bikini-clad breasts.

The Wrigley Company is taking its first step outside the chewing gum market with the launch of Xtra Mints in September. The move is part of Wrigley’s strategy to diversify from it core products to become a confectionery company. The sugar-free range will be available in two flavours, spearmint and peppermint, and will retail at […]

Channel 4 could have saved everyone who registered their votes for the remaining four dullards left in the Big Brother house last Friday night a lot of time and energy, had it just used the results from “Big Udder 2003”. Over the past six weeks FRijj Milkshake – the official Big Brother snack – has […]