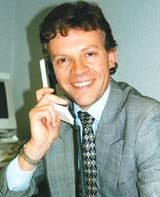 Halifax Bank of Scotland (HBOS) is searching for a sales and marketing director for its cards division, following the abrupt departure of Martin Johnson last week.

Johnson has left the company without a job to go to. HBOS head of cards Neil Radley says Johnson resigned for personal reasons. He adds: “Following the merger between Halifax and Bank of

Scotland, Johnson’s role was expanded and he was living in London, but working in Cardiff. He no longer wanted to do that so he left the company.”

Radley will oversee marketing until a replacement is found. Johnson was responsible for the portfolio division, sales and acquisition, customer relationship marketing and marketing services. These departments will temporarily report to Radley.

Prior to the merger, Johnson was sales and marketing director for Halifax card services. He has also held positions with Citibank UK and Diners Club.

In May 2001, Halifax and Bank of Scotland (BoS) announced plans to merge. The &£28bn deal combined Halifax’s retail brand with the strength of BoS’s corporate and business banking services. The Halifax and BoS brands were both retained by the merged HBOS company. Delaney Lund Knox Warren handles advertising for both brands. BBJ Media was handed the &£25m consolidated media account for HBOS in December (MW December 13).