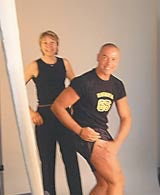 Hello boys. Ever wondered how it feels to be a woman? Or an Olympic swimmer? One man who knows is Rob Gray, who is so high up at Mercier Gray they put his name on the company. Now Rob hasn’t been on the hormones again, nor has he been practising his tumble-turns (at least, not to the Diary’s knowledge). No. He’s just been satisfying his customers. Ahem.

That’s not as sleazy as it sounds, honest. Beiersdorf, which makes Elastoplast, wanted a model for some new products and Rob, always ready to show off his legs, volunteered. Little did he know that he would be required to submit to a shave, at the behest of the supervising physiotherapist… So, gents, the next time you see a pair of shapely pins coming down the stairs, be aware – they might not be what they seem.

LeepeckGreenfield, previously known on this page for its work with birds of prey (MW October 3), has landed a bit of sporty business. Anyone in the UK who follows football will be familiar with the stadium where England recently scored its 2-2 triumph against Macedonia. And many of you will be aware of the Premiership […]