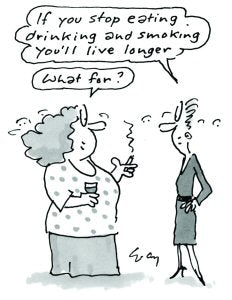 Our exultation was, of course, short-lived, the news too good to be true. The Health Education Authority instantly rose from its own ashes, newly incarnated as the Health Development Agency, and all those hirelings whom we had hoped would find gainful employment in some other calling, such as deckchair attendants or doormen, were back at their desks drafting sunbathing guidelines and issuing safe sex tips for tots.

That was not the end of the story. On All Fools’ Day 2005, the HDA was absorbed into the National Institute for Clinical Excellence, an acronym within an acronym, a quango within a quango, a Russian doll without the sense of fun.

So, should bewildered business owners and shareholders wonder how it comes to pass that Nice, an organisation set up to ration the use of drugs in the NHS, should be urging them to build bicycle sheds, they need look no further than the worm in the bud. Last week’s Nice guidelines on obesity had the dabs of the HDA all over it.

Employers, urged the report, should have healthier office canteens, more workplace showers, and bike sheds. Workers should be encouraged to go for cycle rides during lunch breaks and to use the stairs, rather than the lift.

The great obesity crisis, or timebomb, as it is sometimes vividly described, must to the drudges in their crevices at the HDA have come as a prayer answered. They will have felt like a lost tribe of Israel caught in an unexpected shower of manna. For without plague and pestilence, disease and menace, their lives, like Hamlet’s, are weary, stale, flat and unprofitable.

To appreciate how great was the boon of the obesity scare to the HAD, you have only to read the press release in which it describes the threat as “more damaging to health than smoking, heavy drinking or poverty”. Wow! That’s saying something. Ever since those happy days – gosh, they seem like only yesterday – when the agency was just an infant quango, mewling and puking, the holy triumvirate of beer, baccy and broke lorded supreme as the scourges of our time, compared with which the four horses of the apocalypse were but spavined nags. Then along comes obesity and trumps the lot. Praise be.

So, the boys and girls at the HDA spat on their hands, strapped on their breastplates and rode into action with the results we have just seen. Companies whose primary duty is to produce goods and services and make money are increasingly expected to double up as social workers and pastoral carers. For this they are entitled to feel put-upon and resentful. Obesity is indeed a problem, but not of their making. The causes are to be found elsewhere. They include a lack of sports activities in schools (blame the liberal notion that competitive games are bad), the decline of home-cooking (blame feminist extremism) and the erosion of parental authority (blame the undermining of the family by the state). That a government-sponsored agency should expect the private sector of business to pick up the mess is a bit rich.

Let us, however, find a bright side, starting with the bike sheds. These buildings have earned their place in folklore – alongside the back seats of cinemas and the lavatories on 747s – as locations that, to adapt a phrase favoured by the present government, are fit for some other purpose.

It was behind the bike sheds that an entire generation first enjoyed the illicit pleasure of tobacco and of other things besides. It would be pleasing were that function as a locus for sedition and rebellion to live on under the present dispensation. Given a sufficient show of spirit and independence, workers despatched to cycle during their lunch break would stuff themselves with cream buns behind the bike sheds.

The other pleasing thought is that those few goody two-shoes who do go cycling while others fight for freedom will be assailed by the oaths and contumely that motorists and pedestrians alike reserve for the two-wheeled menace in our midst. I’ll bet the HDA drones are the sort who use bike sheds for parking bikes.•

Soul founders Bruce Crouch and Andy Bird are leaving the agency 18 months after it was bought and renamed by Nitro Group. Crouch has stepped down as managing director of Nitro’s London agency, but is in talks with Nitro founder and group chairman Chris Clarke. It is thought they are plotting a spin-off creative shop […]

Loyalty schemes, particularly the large-scale point collecting programmes used by the major retailers, are going to have to reinvent themselves in order to stay abreast of the revolution in “social media”, according to industry experts. Loyalty Management Group (LMG), which operates the Nectar card on behalf of 17 partners, is talking to agencies about the […]

BT is scrapping its marketing communications team in a restructure that also seesconsumer marketing chief Tracey Follows leaving the company to join Lowe. The entire marketing department, which was scaled back from 80 to about ten roles in a realignment earlier this year (MW July 13), will be folded into the acquisition and retention team […]