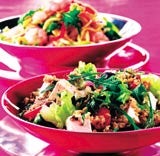 The UK’s children claim health and a balanced diet is top priority, but the majority of them still eat a lot of sweets, chocolate and, of course, fast food

Healthy eating, dieting and weight problems are part of an ongoing debate about healthy eating habits in the UK that is verging on a national obsession. Recent figures from charity Weight Concern show that the number of overweight people in the UK has doubled over the past decade, and experts fear that figure will continue to grow.

Weight Concern claims that in the UK there are 1 million children under 16 years old who are considered obese. But TGI Youth data shows that a significant proportion of children are concerned about their weight and 20 per cent of 11to 19-year-olds think obesity is a common problem among young people.

The data also shows that 15 per cent of 11to 19-year-olds believe that they have close friends who are obese, and a third of them admit to trying to often lose weight.

A high proportion of 11to 19-year-olds believe that to be healthy it is important to eat a balanced diet, and 55 per cent say that it is good to include fibre. In both cases, girls are slightly more likely than boys to have these attitudes. However, one in ten children aged between seven and 19 think that people who buy health foods are strange.

To maintain a healthy body, many children also say they try to keep in shape by joining a sports club, although membership drops significantly as children grow up. Among sevento ten-year-olds, 71 per cent belong to a sports club compared with just 43 per cent of 15to 19-year olds.

Although young people claim to have noble intentions about keeping fit and being healthy, many of them are very fond of chocolate, sweets and fast food with 90 per cent of sevento 19-year-olds admitting that they eat chocolate.

The TGI Youth data shows that 42 per cent of 11to 19-year-olds eat chocolate once a day or more with ten per cent consuming it twice a day or more. The average sevento ten-year-old consumes five chocolate bars every week, which means that this age group alone consumes 13.2 million chocolate bars each week. This is an increase of more than 3 million bars over the past ten years.

The most popular chocolate brands with sevento 19-year-olds are Maltesers, which are eaten by 43 per cent, followed by Cadbury’s Dairy Milk at 42 per cent and Galaxy at 40 per cent. There are differences between the age groups, sevento ten-year-olds consume more Smarties and Kit Kats, and Dairy Milk is most popular with 11to 14-year-olds.

Sweets are not quite as popular as chocolate, but some children are heavy consumers. A third of all sevento 19-year-olds eat three or more packets a week and 13 per cent eat more than five packets a week. The most popular brands are Skittles, eaten by 41 per cent of children, and Chewits and Haribo, both eaten by 40 per cent.

Chocolate and sweets are not the only potentially unhealthy food that young people eat. Fast food is also a huge part of their diet, with only four per cent of 11to 19-year-olds claiming they do not go to fast-food restaurants at all. In the past three months, eight per cent of 11to 19-year-olds have eaten more than 15 take-aways and six per cent have visited more than 15 fast-food outlets over the same period.

The amount of fast food consumed by children varies across the country. In London, 11to 19-year-olds are 38 per cent more likely than the national average to have eaten 15 eat-in fast-food meals in the past three months.

Wales has the highest level of consumption by far with children there 85 per cent more likely to have consumed 15 fast-food meals in the past three months. On the other hand, in Yorkshire and Humberside they are 32 per cent below the national average and in the West Midlands 21 per cent below.

There has been a shift towards health eating and this has not gone unnoticed by fast-food chain McDonald’s, which has introduced a number of low-fat options to its menu.

The move by McDonald’s aims to win back consumers who have deserted the chain because of its reputation of selling unhealthy food. If it proves successful, there will be significant opportunities for fast-food and confectionery brands to reposition their offering to suit a more health-conscious, if not healthy, population.