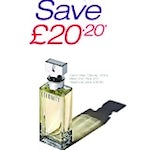 The campaign uses the strapline “Heathrow shopping. The West End for less” and pushes the message that prices at stores within the airport are around 15% cheaper than comparable West End stores.

It is the first time the BAA owned airport has run a campaign to promote the diversity and value of its retail proposition.

Heathrow is targeting passengers from the UK as well as visitors from abroad.

Heathrow believes the campaign will encourage passengers to do their holiday shopping at the airport to take advantage of savings from brands and retailers with outlets in the terminals.

The campaign launches on 5 July ahead of the peak holiday season. It includes press, outdoor, radio and digital activity created by advertising agency Masius.

The ads feature brands including Ray-Ban, Calvin Klein, Estee Lauder and an Apple iPod, whciha re all available at its stores, along with the money that customers could save by buying at the airport.

Gatwick airport, which is owned by GIS, launched a campaign earlier this week with the strapline “Your London airport” as part of a £1bn initiative to revive the Gatwick brand.