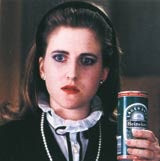 At the conclusion of the special report “Tell me what I think” (MW April 21), the old chestnut of how Heineken lager advertisements failed in focus groups was raised once again as an example of the limitations of research. While it would be fair to say that the advertising was somewhat offbeat and may have been strange at first viewing, another reason was probably encompassed in the script itself.

Having worked on a vast number of research projects for advertising and alcohol in general, there is another factor that I have never heard anyone mention, although I have raised a few eyebrows with some brand owners in the alcohol market with respect to the “context” of the advertising.

The basic premise is this (and it is backed up by another lager brand’s advertising): at the time, Heineken was a virtually

unknown brand of Dutch lager largely unavailable in the UK. Along comes an ad campaign that was undoubtedly highly successful not only in creative terms, but also concurrent with sales success. We all recall the line “refreshes the parts other beers do not reach”. And I would say that this was the problem on first viewing; in common parlance, today lager is not referred to as a beer, let alone 30 years ago.

When Heineken appeared in cans on shelves it was with other lagers, and on the bars in pubs they would have been told by publicans “this is a new lager”. Hence all the confusion was dispelled.

This proves that the context is important. Lager in the UK is lager, and beer is what we would technically refer to as ale. Or to put it another way, lager in the UK is not a beer (from the consumer’s way of speaking).

Market research is simple – it has to be, the majority of us in marketing have degrees, are well educated and are (usually) “worldly”, by definition much more so than the consumers we research.

I am always reminded of an old client of mine who took a very simple approach to all communications, and indeed the wording of research questions – “If Hilda Ogden can understand it, anyone can.” Perhaps we should apply this maxim more to research and its interpretation.