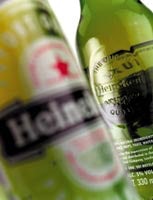 Heineken Ireland is searching for a replacement marketing director after Alistair Spink left the company earlier this month.

Spink joined Heineken two years ago from British Sugar, where he was new business development director. It is not known whether he had a job to go to.

A source at Heineken Ireland says that until a replacement is found, marketing for Heineken and Murphy’s Stout is being overseen by the company’s managing director Padraic Liston.

The Murphy Brewery was renamed Heineken Ireland earlier this year to reflect the Cork brewery’s most successful product. Heineken International bought the assets of the brewery in 1983, and 85 per cent of its output is now Heineken lager, while Murphy’s Stout has become an increasingly niche product.

The &£4m advertising account for Heineken is held by Lowe Lintas, which also handles the brand in the UK. Bartle Bogle Hegarty handles creative work for Murphy’s, while MindShare looks after media buying.

The company also works with Dublin-based agency DDFH&B, which developed a press campaign in May this year, to announce the name change.

Heineken jostles with Budweiser for pre-eminence in the Irish lager market with a 38 per cent share.