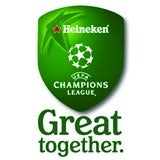 The UEFA Champions League final, between Barcelona and Manchester United, takes place at Wembley on Saturday (28 May).

The Dutch brewing company says the promotion is designed to demonstrate the “global nature” of the conclusion of the Champions League tournament.

The map will feautre expanding and shrinking Heineken beer bottles to visually represent the number of people tweeting about the tournament globally.

The outdoor digital sites will appear at major London train stations from this week and the map will also be housed online.

MediaVest, the agency that created and developed the campaign, estimates around 1.5 million Champions League-related tweets will feature on the maps.

Heineken has sponsored the tournamnet for four years and is also a “tier three” supplier and provider for the London 2012 Olympic and Paralympic Games.

Other brands launching Champions League campaigns around the final include William Hill, sponsor MasterCard and Ford.