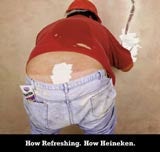 Heineken has unveiled the latest execution in its ‘How Refreshing’ campaign, by Lowe Howard-Spink.

The poster, which goes up this week at London’s Trocadero Centre, features a builder’s bum with a piece of plaster placed over the traditional cleavage. The poster will be moved around the country to a series of as yet undisclosed sites.

A spokesman says: ‘Hopefully it will raise a few eyebrows but I don’t think anyone will take offence.’

The model featured in the ad, Lee Harrington, is a member of male strip act the Wobblies.