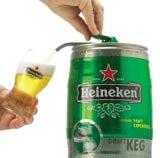 Heineken has launched a portable keg beer system as part of a &£100m marketing push.

Heineken announced in February it was investing an extra &£100m in marketing and repackaging during 2005 in an effort to strengthen the brand’s position in the premium beer market.

The new draught system, known as DraughtKeg, contains 4.75 litres of beer in a small barrel. The beer is poured through a patented pressurised gas system similar to those used in pubs.

The company claims the product delivers a “better standard” of beer. The keg follows the launch of the BeerTender, Heineken’s first home draught beer system, which appeared in Holland in 2004.

DraughtKeg was launched in France last week and will go on sale in the US later this month. The company says it has no date set for a UK launch.

Heineken chairman of the executive board Anthony Ruys says the keg has been developed to improve sales and address changing demand in the beer market.

Last month Ruys announced he was standing down as part of a management shake-up (MW April 14) amid speculation that he was paying the price for falling profits – down by 33 per cent – last year.

In March Iain Newell was appointed marketing director for Heineken in the UK (MW March 17).