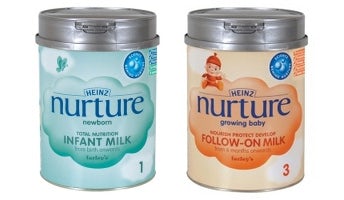 The food giant says it is proposing the move “in order to focus on further accelerating the growth of its core infant weaning foods and drinks business.”

In the UK infant milks market, Heinz has been a minor brand with a share of only about 2%.

Heinz says the proposal would only affect the UK market and is subject to consultation with affected employees.

Supplies to the NHS of Heinz Nurture Newborn and sterilised water in 100ml bottles would also be discontinued.

In a statement, Heinz says: “Infant Feeding remains an important core growth category for Heinz globally. Heinz continues to sell infant formula milks in multiple developed and developing markets. Heinz is market leader in the infant dry food category and is the number one home cooking brand for infants while continuing to drive successful innovation with new fingerfoods, Cook at Home sauces and new recipe additions to the successful Mum’s Own range of weaning foods. “

If the proposals are agreed, the Heinz Nurture range of baby milks would be phased out gradually over a period of several weeks to allow parents time to switch to alternative products.

Heinz says it will be communicating as widely as possible with parents to alert them to the discontinuation.

Baby milk marketing has taken a hit from websites such as Mumsnet, who object to the way the formula is advertised. Last month, the Advertising Standards Authority banned a TV advertisement for Heinz’s Nurture for misleading consumers.

Last year, Heinz devised a marketing strategy and appointed agencies for its new Nurture range of formula and follow-on milk for infants. TBWAPaling Walters, the new specialist healthcare division of TBWA, was appointed to handle a variety of communications while Haygarth was appointed to develop a new online and offline CRM programme.