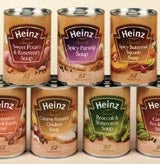 It is launching a new Heinz Special range, which has nine flavours, including Sweet Potato and Rosemary and Carrot and Ginger. It is aimed at encouraging consumers to see Heinz soups as more than a cupboard staple. The range has softer, beige-coloured packaging to differentiate it from the classic range, which uses red cans.

The classic range has also been improved with changes to the nutritional content. Heinz has added more of the key ingredients, such as extra tomatoes in the Cream of Tomato Soup. It has also lowered the salt, sugar and fat content across the range.

Heinz Soups marketing manager Nina Sellhammar says that the brand now has the lowest levels of salt, sugar and fat across the whole soup category. It started reducing salt levels in 1997 and has now reduced them further as part of the reformulation of the recipes.

The changes will be rolled out in a series of one-day changeovers across all the major retailers starting from August 15.

They will be supported by a tele-vision campaign, which will break in October and will be followed by a second burst early next year. Heinz will also be running sampling campaigns for customers supported by in-store activity and an online campaign.