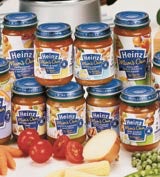 Food giant Heinz is launching a baby food brand called Mum’s Own, based on recipes supplied by mothers. It hopes the range will enhance the image of pre-prepared baby food and attract new customers.

The jarred baby food range, which goes on sale this month, has 17 dishes and will replace the original Heinz baby foods where the meals are similar.

The jar label will feature the name of the mother who created the dish, such as Tamsin Turner’s Vegetable Squash and Chicken. Heinz plans to increase the range in the future.

The decision to launch Mum’s Own follows the success of the Heinz Homemade range, which was launched last October after a competition to find the best four home-made baby food recipes. The labels of these dishes also featured the name of the mother who created the dish. Mum’s Own will replace the Homemade range.

Heinz Baby Food brand marketer Claire Stocker says that the range will offer choice and quality in pre-prepared baby food and is aimed at reducing the guilt some mums feel about not preparing fresh food themselves. The range will be supported with a press, direct mail and sampling campaign.

The launch comes just weeks after jarred baby food was linked to a cancer health risk. The European Food Safety Authority warned that it had found a chemical, semicarbazide, in the protective seal on jar lids. In trials on animals the substance has been linked to cancer, liver damage and miscarriage. Baby food manufacturers, including Heinz, are understood to be working on alternative packaging.

Mirror Group Newspapers (MGN) has appointed former IPC ad chief Clare Dove as director of advertising. Dove was previously group advertisement director of IPC Southbank, with responsibility for 17 titles, including Marie Claire and Homes &amp; Gardens. She left the company in September (MW September 11). At MGN, Dove will be responsible for ad sales […]

Gucci head designer Tom Ford and chief executive Domenico De Sole are leaving the luxury brand that they were credited with saving, after failing to agree new contracts with owner Pinault Printemps Redoute.