The 40-second television spots feature people talking about having ‘good days’ thanks to the support the charity provides with a voice over provided by Helena Bonham Carter.

Press and online ads with the tag line “Good Day? Bad Day” will also appear in national and consumer titles and across sites including AOL, MSN and Yahoo!.

The campaign aims to act as a call to action to cancer sufferers to contact Macmillan and “take the first step to having more good days.”

The single phone number replaces several different numbers callers previously had to use to access the charity’s various support services. The numbers have been combined in a bid to deliver better and more in-depth support to people affected by cancer.

Ali Sanders head of brand at Macmillan Cancer Support says: “Advertising is an essential tool to get the new number out to as many people as possible and make sure they know exactly who we are and what they do.”

The multi-channel campaign was created by Arthur London with all media buying handled by PHD and i-level.

The TV campaign breaks on terrestrial and satellite channels on 5 October and three shorter variations of the adverts will appear on satellite TV channels. 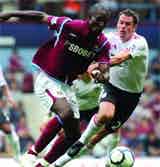 The sponsorship industry is coping well in the recession but the economic climate has forced both rights holders and brands to assess how they develop packages and activation programs, according to sponsorship experts.