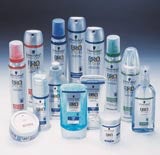 Henkel is teaming up with Lycra to launch a range of Schwarzkopf hair products.

The German toiletries and detergents giant is thought to be using the Lycra technology to improve hold and flexibility in Schwarzkopf hair sprays. The move follows the launch of a Lycra-based hairspray in Germany earlier this year, as part of Henkel’s Taft range of consumer haircare products. A spokesman says: “The Taft range is similar to Schwarzkopf’s Pro-Styling line. We don’t use Lycra at the moment but it is something we are looking into for the UK market.”

Henkel launched the Taft Lycra range in June, following a licensing deal with US textiles and polymer company Invista, which also owns the Stainmaster and Teflon brands.

The range is available through many pharmacies, supermarkets, wholesalers and department stores in Germany.