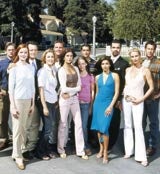 Procter &amp; Gamble’s Herbal Essences is to sponsor Channel 4’s Desperate Housewives in a deal thought to be worth up to &£2m.

It is the first time that P&G has taken its relationship with Channel 4 beyond traditional spot advertising. Channel 4 negotiated the deal direct with P&G and 4creative is creating the idents.

The loves, lives and sniping of a group of housewives in Wisteria Lane have so far proved a success for Channel 4, with the series averaging audiences of 5.5 million and a 26 per cent share of viewing.

Herbal Essences brand manager Craig Foster says: “This sponsorship will enhance the contemporary, fashionable image of Herbal Essences and is a perfect fit with our ‘organic experience’ campaign idea.”

The first episode of Desperate Housewives was broadcast on January 5. Episode five is due to run this week. P&G’s sponsorship will start on February 9 and runs for a further 17 episodes.

When the show was broadcast in the US it produced an outcry among various groups including the Parents’ Television Council and American Decency Association, over its racy content. The ADA even urged supporters to boycott brands that had advertised during the programme, and in November last year Yum! Brands, the company behind Pizza Hut and KFC, said it would no longer advertise during the show. But Desperate Housewives has been such a hit in the US that the broadcaster, Disney-owned network ABC, has had little difficulty replacing advertisers, and has increased its rates for slots during the show.

Coca-Cola and Pepsi, Vodafone and Orange, General Motors and Toyotaâ¦mostly we have no trouble in identifying the key competition of the world’s biggest brand owners. But what of Procter & Gamble, now unquestionably the world’s largest packaged

Elvis, the direct agency, has created the first burst of advertising for Cadbury’s Dairy Milk’s centenary year. The campaign includes television, radio, press and online advertising and will support the brand’s ‘2 Seats’ promotion, which offers consumers the chance to win two seats to the ‘best of British’ events – a selection of the UK’s […]