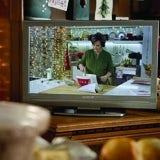 The “recipe for great food” campaign features both chefs in a faux-documentary style television ad.

The activity, which also includes press and online, uses the strapline: “Everyone’s recipe for a great Christmas”.

The campaign is split into two parts, one featuring Smith under the “bake” banner and the other featuring Heston and the “Heston for Waitrose” Christmas range under the “treat” banner.

As part of its festive offers, Waitrose is also running a half price promotion on mince pies, port and cream, promoted through press ads.

Morrisons has launched a Christmas ad focusing on its fresh produce message, while Asda’s festive campaign focuses on its Extra Special food range.

Sainsbury’s has yet to reveal its Christmas campaign.