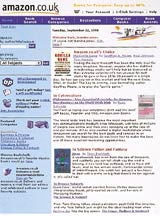 Amazon’s advertises through the press and outdoor, but sources say it may soon use television, which could see the value of the account increase to about &£5m.

Amazon is expected to ditch its current advertising for a completely new creative approach. The most recent press and poster campaign, through Banks Hoggins O’Shea/ FCB, features a computer mouse and emphasises the low cost of its products. The agency says it repitched for the account.

Amazon’s media account, handled by Total Media, is not affected by the review.

HHCL’s appointment followed the sudden departure last week of Amazon’s UK chief Simon Murdoch, which came on the back of the loss of marketing director Chris Ketley after less than four months in the post.

Amazon.co.uk, the UK arm of Seattle-based Amazon.com, was launched in October. The parent company claims to be the world’s largest Internet retailer of books.

It recently began selling a limited selection of toys and electronics online through a gift section it launched last year (MW August 17). If successful, Amazon is expected to expand the scheme into Europe.