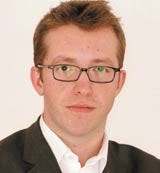 It is thought that Howarth will join CHI imminently.

It is understood that Howarth will take the title group chief executive, but will not have responsibility for the London agency. He will oversee below-the-line agency Hall Moore CHI, which recently won the &£8.5m direct marketing business for The Telegraph Group, and its joint venture with Naked Communications, Naked Inside. The agency has a public relations joint venture with Freud.

Howarth will be responsible for expanding the group by developing new agencies to broaden CHI’s services offering.

Industry insiders suggest that Howarth’s move to CHI may lead to Sky moving its &£4.5m business into the agency. Wieden &amp; Kennedy picked up the broadcaster’s account earlier this year following a pitch that did not involve HHCL, the incumbent on the business.

Howarth joined HHCL from Ogilvy &amp; Mather in 1995 as an account director on the Britvic account and worked his way up to client services director, before being promoted to managing director in 2002.

He was made chief executive earlier this year when planning director Sid McGrath took over as managing director.