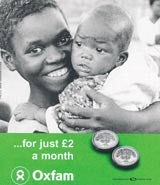 Oxfam is understood to have appointed HHCL/Red Cell to handle a campaign to improve trading conditions for the developing world.

HHCL beat off competition from Team Saatchi, WWAV Rapp Collins – the charity’s direct marketing agency – and the in-house creative team. In the past, Oxfam has used BMP DDB for its retail outlet advertising, but the agency did not pitch for this piece of work.

The agencies were asked to come up with an idea to build support for its global petition, in a bid to gain 500,000 names.

Oxfam aims to run the campaign ahead of the World Trade Organisation’s summit in Mexico in September. It has already signed up celebrities such as Coldplay singer Chris Martin, Ms Dynamite and Oasis songwriter Noel Gallagher to support the campaign. Earlier this month, Ken Livingstone pledged his support to make London a fair trade city by trying to ensure that a range of fairly traded products are available in more than 700 shops throughout the capital.

Most of the attention has been focused on coffee growers, and NestlÃ© in particular has come in for heavy criticism. At the beginning of the year, the charity persuaded the food giant to drop a £3.7m claim against the Ethiopian government.