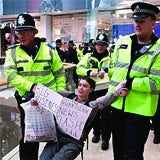 UK Uncut is targeting companies and individuals who they claim avoid paying tax in a protest against the Coalition Government’s cuts to welfare and public services.

TopShop’s flagship store on London’s Oxford Street was forced to close at the weekend during a national protest at TopShop and BHS outlets. The protest was aimed at Philip Green, who runs the shop’s parent company Arcadia, but which is registered under his wife’s name in a tax haven.

The group says Government cuts will hit the poorest and most vulnerable people in the UK and could be avoided if corporations and wealthy individuals paid taxes appropriately.

The protest on Saturday also saw the closure of TopShop outlets in Brighton, Nottingham, Birmingham, Leeds, Manchester, Oxford and Newcastle.

UK Uncut spokesman Will Davids says the group “has not decided yet” which brands it will focus on next, but listed Tesco, Boots, HSBC, Marks & Spencer, Cadbury and Barclays as possible targets in a series of protests expected to take place over Christmas.

The group previously focused on Vodafone after the corporation reached a settlement on a long standing tax dispute with HMRC earlier this year, following the change in government.