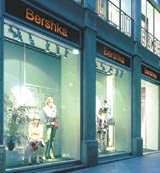 The plunging temperatures and snowy weather at the start of March hit fashion retailers hard as people chose to stay indoors rather than browse the high street for the latest spring collections.

According to the Office of National Statistics, consumer spending on the high street for the past three months was down by £400m on the final quarter of 2004, with retail sales falling by 0.6 per cent.

It seems that consumer confidence has taken a dive. Fears of interest rate rises and a collapse in house prices, along with the prospect of a General Election, are doing little to restore it. This downbeat mood has been reflected on the high street, with several retailers, including French Connection, Gap and Marks &amp; Spencer, starting their mid-season sales early.

But despite this gloomy start to the year, both Spanish retailer Inditex, owner of Zara, Zara Home and Massimo Dutti, and Gap are introducing new brands to the UK. Last week, Inditex launched its fourth brand, Bershka, on London’s Oxford Street after opening its first UK outlet in Newcastle’s Metro Centre last autumn. Gap is understood to be planning the launch of its Banana Republic chain in the UK later this year.

But the combination of tough trading conditions and an increasingly fragmented market means there is no guarantee of success. Italian fashion chain Expensive! opened stores on Oxford Street and Regent Street in 2003 and has already closed down. Japanese retailer Uniqlo has also scaled back its operation after an ill-fated UK launch in 2001, but has since started to rebuild its chain. Analysts say that it tried to expand too quickly with what was seen as a “bland” offer.

Verdict Research senior retail analyst Maureen Hinton says the signs are positive for Bershka, as affordable fashion retail brands aimed at the younger end of the market, such as Topshop, have been performing well. Value fashion retailers, such as Matalan and supermarket clothing outlets, as well as aspirational stores such as Phase Eight and Jigsaw are also experiencing healthy sales. But the real battle for customers is being fought in the crowded mid-market sector, which includes larger-space retailers such as Bhs, M&S and Next. Seymour Pierce retail analyst Richard Ratner says that polarisation in the fashion retail industry is squeezing the mid-market, but he believes retailers in this area can succeed as long as the product is right. However, if the product doesn’t appeal to the public then sales will suffer. He points to French Connection, which reported a 17 per cent drop in like-for-like sales for the five weeks to the start of March. Gap also experienced a three per cent decrease in same store sales in February.

Industry observers will be watching Next this week, as it is due to report its full-year results. Its performance is often seen as a barometer for how the market is faring. Ratner predicts the chain will report that it is struggling to cope in current conditions, but that its pre-tax profits will be at the higher end of its £415m to £425m projected profits.

But even in the cluttered mid-market there are retailers showing growth. For instance, Monsoon reported an eight per cent rise in like-for-like sales for the year to January 2005, boosted by the popularity of the “boho” and “gypsy” fashions.

The latest data from TNS FashionTrak shows that the multiple chains, such as Hennes &amp; Mauritz, New Look and Zara, command the biggest share of shoppers’ spend at 26.3 per cent for the 24 weeks to December 12, 2004. This is up by 0.3 per cent for the same period in 2003. Perhaps predictably, the general store category, which includes M&S, reported a decrease in share of 0.7 per cent to 15.5 per cent for the same period. However, one trend that is a concern for all high street retailers is in the rise in the share held by supermarkets, which has increased by 0.5 per cent to 5.8 per cent.

Mintel Retail director of retail research Richard Perks says that although supermarkets do not have the same authority on fashion, their success affects high street retailers as it will increase consumer demand for quality clothing at cheaper prices. Hinton agrees, saying that pressure on prices has been affecting retailers for the past year, with many working hard to manage margins. While sourcing cheaper items helps, many have been forced to increase the number of sales each year in a bid to clear out leftover stock.

Hinton says: “The power is in the hands of the consumer rather than the retailer. Retailers are having to think about what they are doing as the chains that are growing are the ones that are opening more stores. The pot is getting bigger, but only slightly, so retailers are having to work hard.” Hinton also believes that retail groups have to think about targeting customers more tightly. She points to the Mosaic Group, in which Baugur has a 42 per cent stake. It owns the Coast, Karen Millen, Warehouse and Whistles brands – a complementary mix that does not rely so heavily on volume sales. She says: “All the brands have different looks and customers, but they complement each other, which means that the group can make significant back office savings.”

Hinton adds that larger chains can no longer survive with a commodity offer and believes they also have to define their target market and merchandise appropriately. She says: “M&S has flirted with segmentation, but it has never followed it through and although it is trying different formats, there is a danger that it will return to that commoditised way of selling.”

M&S is also having to make changes to its supply chain so that it is able to turn around its offer more quickly. Inditex fundamentally changed the UK fashion market when it introduced Zara in 1999, because a speedy supply chain meant it was able to get a product from design stage to store within three weeks. It forced existing retailers such as Topshop to look at their own sourcing and supply chains and to change the way they work to stay competitive.

But Perks believes that the phenomenal success of Inditex cannot last. He says: “It is very difficult to knock Inditex as it has done so well, but I am sceptical of major groups that try to target different areas of the market.”

While there is much uncertainty ahead, retailers will have their fingers firmly crossed that the recent spell of warmer weather will help to kick start sales over the Easter break and keep tills ringing into the summer.l