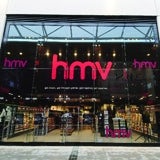 The entertainment group says its festive campaign has been inspired by “modern-day icons of music, film and games”.

The campaign features entertainment figures including Lady Gaga, Take That, Buzz Lightyear and the Mario Brothers in 3D-style Christmas baubles hanging from branches of a Christmas tree.

The featured characters tie in with expected big sellers for the Christmas period and promotions that HMV is running during the peak trading season.

HMV is introducing the strapline: “Get Merry” which will run across all its festive marketing.

The retailer is also pushing its PureHMV loyalty programme using the strapline: “Reward someone you love this Christmas”.

The press and television ads break on Friday (5 November) followed by in-store and online activity from 8 November.

Mark Robertson, HMV group head of brand creative, says: “Our aim has been to bring together a number of key elements that will help to create a truly engaging and impactful campaign.”

The campaign was developed by brand agency venturethree.