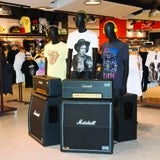 HMV has trademarked “Three Six Three” as the brand name for the proposed range.

The mark takes its name from the address of the original HMV store, which opened in 1921 at 363 Oxford Street under the moniker His Master’s Voice.

A spokesman for HMV says the group believes there is scope within its fashion objectives to develop an own-brand range of basics clothing to supplement the branded fashion it sells.

Studio sells brands that have “a strong affinity with music”, he adds.
“At some point we may also look to develop an own-label option. We’ve registered the brand name 363 as a possible future trademark.”

The move into fashion retail is the latest phase of HMV’s efforts to diversify its portfolio and transform from a music retailer into a “broad-based entertainment brand”.

At the launch of Studio, HMV said fashion is a “natural progression” for the chain because “music and fashion overlap and influence each other so strongly”.