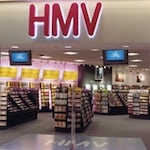 The entertainment retail group reported a 17.7% rise in pre-tax profit to £74.2m.
Total sales increased 3.1% to more than £2bn but HMV UK saw like for like sales, which strip out new stores, dip 2.4%.

The group’s book chain Waterstone’s reported a “disappointing” performance with like for like sales falling 6.2%. Its profit slumped by more than 70% to £2.8m.

The group chairman Robert Swannell says the turnaround strategy for Waterstone’s, including relaunching the brand and improving store fascias is already underway and having a positive impact.

HMV has also launched a joint venture with independent cinema group Curzon to open a cinema above its Wimbledon store.

It also launched its own music festival The Next Big Thing, hosting live gigs at six of its joint owned venues in London.

The PureHMV rewards scheme, which won the CRM/Loyalty category at the Marketing Week Engage Awards last month, is ahead of expectations with more than 1 million members.

In March, HMV set out a three-year strategic plan for the business built around the “three pillars” to continue to evolve HMV’s product mix, grow in live and digital and turnaround the Waterstone’s chain.