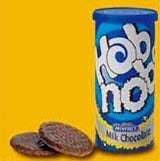 McVitie’s Hob Nobs launches its first online advertising campaign this week. It will appear on Virgin.net, which used to be known as an all-purpose portal but now describes itself as “the UK’s leading entertainment and leisure service online”.

The Hob Nobs campaign, which will run for two weeks, supports the biscuit brand’s “You’ve been nobbled” press and radio campaign, created by Steam. The online creative work has been handled by Virgin.net’s in-house team, which has come up with a “quirky” micro site in the style of the offline ads.

The site is based around a series of “daily nobbles” – strange-but-true stories reported in the world’s press or used as April Fool pranks. They include the notorious “Swiss spaghetti harvest” report by Panorama in the fifties.

Virgin.net users who click through to the micro site will be able to read about these “nobbles” and have the chance to win two prizes: a yoga holiday in India for women and a holiday to LA’s Venice Beach for men.

McVitie’s senior brand manager Mariam Ghali says: “A solus website is not commercially viable as part of an ad campaign for packaged goods brands. We have therefore linked with an already successful website with similar brand values and target audience.”

Virgin.net marketing director Jo Peat, who put the deal together, says: “More packaged goods brands are recognising the value of online advertising. The target audiences for Virgin.net and McVitie’s Hob Nobs are remarkably similar and the cheeky humour of the campaign will appeal to our 1.5 million users.”