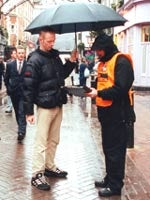 Following last year’s customer relationship management (CRM) boom, anecdotal evidence is emerging that businesses are more interested in winning new customers than hanging on to their existing ones and selling them more products. Industry observers say economic uncertainties sparked partly by the September 11 attacks and the US downturn, together with difficulties in implementing CRM software, have for the time being meant many companies have put their customer retention strategies on the back burner.

Yet marketers often quote the musings of Bain &amp; Co loyalty guru Frederick Reichheld on how much cheaper it is to keep hold of existing customers than it is to recruit new ones. In his 1996 book, The Loyalty Effect, Reichheld claimed that a five per cent improvement in customer retention would produce, on average, a 35 per cent increase in profitability for a software supplier. For car or home insurance businesses, the increase would be 84 per cent. For advertising agencies, the five per cent increase in customer retention would boost profits by 95 per cent.

Nevertheless, there remains a feeling that companies have failed to grasp the nettle and are not bothering to give existing customers their best service as they relentlessly search for new ones. This has been demonstrated recently in the mortgage market, where Halifax – among others – has faced criticism for introducing a reduced mortgage rate for new customers, which was not on offer to existing mortgage holders.

It is easy to talk about retaining customers, but putting in place the strategies to ensure this happens, particularly for larger companies, can be hard. Neil Woodcock, chief executive of Ogilvy-owned research company QCi, says: “If a multinational says ‘These are our brand values’, transmitting them to the whole company is very difficult. People do care about retention – the difficulty is turning that understanding into reality. You have to change the attitudes of your own people before you can influence the customers’ attitudes. That is where companies struggle.”

Woodcock says that there is now so much competition in many sectors that if customers have a problem, instead of complaining they will simply leave for a rival. Clearly, trying to lock customers in is a massive – and potentially costly – task. Woodcock gives the example of telephone bank First Direct, a company which is acclaimed for its high levels of customer service. But he claims the company has turned out to be less profitable than it should be: “It has over-delivered to customers who weren’t worth it. They have invested more money in service than their customers justify.”

First Direct denies this, and commercial director Peter Simpson responds: “First Direct has been a profitable organisation since 1994, selling more products to its customers than any other bank. It is beyond doubt that there is a direct link between service reputation and sales. The best way to keep a customer is to satisfy their needs by providing them with the right product. If indeed First Direct does ‘over-deliver on service’, then it certainly does not affect our success and our long-term profitability.”

On the other line

But while banking is seen as a sector that suffers little from customer churn – the clichÃ© being that it is easier to get divorced than it is to change your bank – this is not the case with mobile phones. It is extremely easy to change network, and some estimates put the turnover at up to 50 per cent of customers a year. Given that mobile operators offer customers subsidised handsets, this has become a serious problem.

But BT Cellnet claims that it has managed to reverse the trend, tying in customers to a long-term relationship, through a loyalty programme called BT Cellnet First put together by direct marketing agency Tullo Marshall Warren. It claims to have cut churn by half among First members, to have increased customer satisfaction and given a boost to average revenue per user. After a customer’s first six months on the scheme, BT Cellnet checks their calls against all its current market tariffs and calculates whether they could save money by being on another tariff. If they could, then through the First Programme they are offered “Best Plan Advice”. This advice is different for each customer.

A loyalty bonus is offered after a customer has been with BT Cellnet for a year, and the company calculates which reward would save the customer most on their monthly bill. BT Cellnet head of CRM Richard Dixon says: “We are in a highly saturated market (68 per cent of UK consumers have a mobile) and while it is essential we plan strategies to acquire new customers, it is crucial to focus activity on profitably retaining our existing base. The reason that First is so successful is because it can be individually tailored to every customer.”

He believes the scheme eases customers’ worries about their bill; it gives them financial incentives to stay with BT Cellnet; and it builds a one-to-one relationship with customers. Dixon claims BT Cellnet’s flexible data and production techniques “mean we can focus our marketing activity on those customers who give us the highest return”.

Some believe that BT’s price plans are so complex that it is difficult for customers to compare them with schemes from other companies. Cramm Francis Woolf managing director Paul Woolf says: “The trend is to use sales promotions to ‘take out’ consumers from the market, or bundling to make price comparisons difficult. BT has used BT Together and other packages to successfully move the comparisons away from price alone to looking at other features, which make competitor comparisons difficult.”

He believes that locking in customers is the key, and that marketing directors have to ward off the price threat by bringing together direct marketing, sales promotion and e-marketing to “accurately find, target, and motivate the best customers cost-effectively.”

But while private companies and brand-owners have lagged behind in their attitudes to customer retention, UK charities have led the way, according to Leonardo chief executive Steve Barton.

About two years ago, charities realised their marketing strategies were basically flawed, he says. They were trying to get people to fork out lump sums in one-off donations, but realised that it would be more efficient to sign them up to direct debits, locking them in over a period of time. He says: “The old model was to reduce the cost of donor acquisition… but two years ago, they realised the model was structured to deliver less-valuable customers in the long run.” Now, most charities focus on “committed giving” and signing up donors for long-term contributions.

Many companies have jumped on the loyalty card bandwagon, investing heavily in CRM software with questionable results. Rebecca Braithwaite, a director of customer management consultancy Blueberry Wave, says: “We have seen a number of companies embrace customer retention through points collection schemes. Organisations from airlines through supermarkets to mobile phone networks have jumped on this particular bandwagon, as well as investing in CRM software.”

But she believes that many companies talk a good game on customer retention, but have so far failed in practice. She feels that successful companies will be those that have understood customers want a simple life and relevant products that deliver without any ugly surprises. She cites Virgin Mobile as a company that offers a simple product and is quite transparent about its charges and the reasoning behind its minimum charge. “No frills” airlines are another response to customers’ different perceptions of value, depending on whether they are out for leisure or business.

But some believe customers are retained not so much by customer service as by using data to build a “qualitative relationship”. Swetenhams senior business development manager David Barragry thinks that companies could do more to predict which customers are most likely to move, and when, so that they can take targeted, defensive action.

He says: “Customer-retention strategies are a headache for all companies. Many businesses don’t even know which customers to keep in the first place, much less how to keep them. Everyone aims to retain their ‘good’ customers, but few have much idea of which ones they are.”

He believes that customers have to be tracked over time, because the valuable ones won’t necessarily be valuable all the time. Loyal customers, who regularly pay all or most of their credit card bill each month, but suddenly starts paying less – perhaps coupled with a change of address, indicating that they may have just bought a new house – may be likely to respond to an interest-free finance offer from a competitor. He says that the single most important thing about retention strategies is being able to measure what works and what does not.

Whether companies really do manage to put customer retention ahead of acquisition depends on the strategies they employ, and how cost-effective they are. Simply quoting loyalty gurus is not enough. You then have to persuade the rest of the company to follow the advice.

Marketing Week and Precision Marketing are launching the DM Show – the only existing central London event to focus on direct, response-driven marketing – at Earls Court, London from October 15 to October 17.

With over 150 key exhibitors, the show has a flexible conference programme with talks by independent experts as well as demonstrations of the latest direct marketing products and techniques.

Both the IDM and the CIM are supporting the initiative, which aims to raise the profile of accountable, response-driven marketing.

New trends come and go, but human behaviour and emotions remain constant, which is why brands need to focus on a true purpose that creates belief and love.