The decline of package holidays and the rise of online booking are changing the structure of the UK travel industry. These shifts threaten to leave behind established operators such as Thomas Cook and First Choice as travellers turn to a new group of brands to fulfil their holiday needs. Expedia, Lastminute.com and even Google are rapidly taking the place of the high street operators.

Guy Gillon, associate director at PricewaterhouseCoopers, underscored the extent of the shift last week. He told representatives at the Association of British Travel Agents in Marbella that traditional beach and package holidays are in serious decline. He advised agents and operators to broaden their offers to include the holidays that are experiencing most growth – sea cruises, activity holidays, extreme sports trips, health and spa holidays and nature and wildlife trips.

More travel, less packaging
His warning is backed by Civil Aviation Authority research which shows that while leisure air travel in Britain has more than doubled in the past decade, from 20 million trips to almost 50 million, package holidays’ share of the market has plummeted from nearly 90% to less than half.

Gillon says/ “Last year only a third of holiday-makers booked their trip six months or more before they travelled and now that figure has reduced to one in eight consumers. A quarter of travellers book their holiday the month before they take it compared with only 4% of consumers last year. Insistence on flexibility and convenience is growing. The industry needs to become more flexible to allow for such volatility. If a consumer wants to go somewhere adventurous and exotic but does not want to book ten months in advance then that is what must be on offer.”

Gillon says some brands will not have the resources to stretch themselves to cover everything demanded by consumers and must be strategic in rationalising their businesses to specialise in niche customers, destinations or activities.

“There are new consumers not provided for by traditional travel industry giants. If these brands want to survive they must target specific consumers and come to understand them and their habits,” he says.

With brands being advised to specialise in specific areas of the industry, 2007 could see a pattern of consolidation – such as the race between Thomas Cook and MyTravel to buy First Choice’s £500m package holiday operation, leaving the Crawley-based company to focus on specialty and activity based holidays.

Leisure analyst at Brewin Dolphin Securities, David Pope, says: “Though the package holiday industry is in decline, MyTravel and others are in the market for that sort of business because there is still some demand for it and MyTravel, for example, doesn’t have the exclusive accommodation choice the other big brands rely on.” 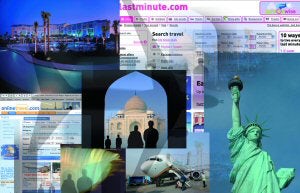 Battle for market share
Pope predicts the First Choice sale will be the only example of consolidation among mainstream brands but that fierce competition to consolidate and gain market share will be typical among smaller, specialised online firms.

Meanwhile, Simon Ferguson, publishing director of the TW Group, says internet savvy consumers are changing the way travel businesses are run and agrees the industry must change with consumers.

According to Ferguson, travel is the third largest online industry and is growing at 20% per year. “But the consumer experience is not good,” he says. “There is less satisfaction online generally than there is in retail outlets, because traditional brands don’t consider service when offering their product online. Online travel is heavily focused on transactions, but good service must be considered. Elsewhere on the internet consumer power is being harnessed with user-generated content that gives the customer the role of king.”

Ferguson says the number of blogs on the internet is currently about 50 million and doubles every six months, but the traditional industry giants are nowhere to be seen. “Why not let your users log their experiences and link into other sites to increase traffic?” he asks.

Other internet phenomena are also becoming increasingly influential. Second Life, where users can create a virtual existence for themselves, now has 1.5 million members with an average age of 32, who spend 22 hours per month networking and socialising inside the social construct. Now travel brands have started paying attention. Starwood Hotels is developing a virtual hotel in Second Life so users can experience the brand as a way of advertising its real hotels.

Benji Lanyado, editor of YounginEurope.com, a website that encourages students and backpackers to log their own tips and experiences after European trips, says: “The democratisation of knowledge that the internet provides means we don’t need travel agents, travel writers or even Lonely Planet guides anymore.

“Yes there are fundamental issues of trust and subjectivity when you are using another traveller’s experience to inform your own decisions, but with enough exposure, untruths and bias soon get rooted out. It’s easy to spot when a hotel owner has blogged about his own hotel brand under the guise of a traveller if it doesn’t tally with what else is written.”

Yet amid such change, a recent Barclaycard poll suggested 41% of travel brands don’t have an online presence because to set one up would be “too expensive or complicated”.

Long-term changes
Simon Carter, marketing director for Thomas Cook, which last week recruited its first online director to look after Thomascook.com, is defiant and says: “Neither threat – changing demand from consumers or the internet – is particularly new. The travel market has been steadily changing for ten years with the advent of holiday bookings online and no-frills airlines.

“People see Expedia and Lastminute as pioneers of the dot-com revolution, but today’s online travel bookers are increasingly switching to the websites of the major travel companies. Even now, the well-known online-only brands make most of their bookings via weekend breaks, accommodation and flight only, and have been unable to harness the potential for the longer duration packages that are still the mainstay of the holiday market.”

Derek Jones, sales director at Thomson, which has 700 retail outlets, is more circumspect. He says: “We recognise the internet harnesses masses of information that empowers customers, and we are at the forefront of that with our website containing 1,800 videos, a blog section and Google Earth links to show the locations of destinations. But the opportunity for our customers to engage with real people is still vital according to our research.” Jones admits that: “Going forward our model will change and we may have fewer shops.”

Youthful tourists are increasingly becoming a lost cause for the established operators. Older travellers who, perhaps in their twilight years and wary of new technology, still prefer to go and book holidays through a friendly agent, may be the last generation to do so in this way.

Kevan Mallinder, director of portfolio brands at InBev UK, and Mandy Bobrowski, who was in charge of innovation and special projects, are understood to be leaving, following a restructure of the beer company’s UK brands marketing team. The restructure is to bring the UK into line as part of a global reorganisation of its marketing, […]

Volvo is reviewing its global creative account, which is held by Euro RSCG in the US and Abbott Mead Vickers.BBDO in the UK. According to reports in the US, the review has been called by new Volvo chief executive Frederick Arp to help address falling sales. The Ford-owned Swedish carmaker has retained Euro RSCG as […]

Premier Foods has appointed Starcom to handle its 15m media planning and buying account. It beat Carat to win the business. The account was previously split between ZenithOptimedia, Independent Central Focus, which worked on planning and Walker Media . All three agencies were knocked out at an earlier stage.