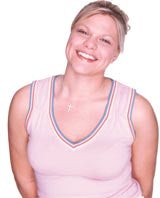 The Diary doesn’t normally go in for celebrity gossip, so it’s lucky this story isn’t about anyone famous. Just infamous. Yes, this one’s about everybody’s favourite Big Brother contestant, Jade. (She must be as, surprisingly, she’s still in the house.)

For those of you not following the latest series of Channel 4’s reality (in the loosest sense of the word) TV show, Jade has been branded by the papers as one of the biggest bitches in the country – the other was evicted last week. During a visit to the BB psychiatrist, she was even told to stop being such a two-faced cow (in politer language of course).

The Diary has heard a rumour that Jade has been known to work in M&C Saatchi’s kitchens. Doing what, the Diary has yet to find out; tasting, perhaps? Whatever happens to Jade post-BB, the Diary thinks the sooner she gets her head back in the oven the better.

Nothing to do now that Wimbledon is over for another year? Then the Diary has a solution for you – or rather, the Design Group has a solution for you. If you’re twiddling your thumbs, desperately looking for something to replace your World Cup scorecard pop up, or displace the reruns of yesterday’s tennis matches, […]

The UK directory enquiries market is being deregulated, and ‘192’ will vanish. But can the public be persuaded that it matters?

Bulmers has promoted its UK consumer marketing director Jon Eggleton to group marketing director, as the cider giant battles against what chief executive Mike Hughes calls a “tidal wave of ready-to drink (RTD) products”. In his new role, Eggleton will have worldwide responsibility for all of its brands, and a seat on the main board. […]