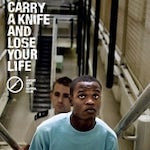 The television, digital and outdoor activity uses the strapline “carry a knife and lose your life” and aims to demonstrate how carrying a knife can lead to jail.

The TV and online spots will feature testimonials from real inmates warning of the consequences of knife offences, while posters will also portray the penalties.

The campaigns is the latest step in the Government’s national marketing campaign, “It Doesn’t Have to Happen”, which aims to reduce knife carrying among 10 to 16-year-olds.

The Home Office claims “millions of young people” have been reached by the campaign, while 10,000 are friends of the campaign on Bebo.

The campaign supports the work of the cross-Government Tackling Knives Action Programme that operates across England and Wales in the areas most affected by serious youth violence.