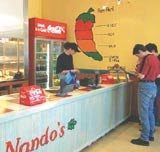 Nando’s, the chicken restaurant chain and sauce brand, has appointed Hooper Galton to handle a project. It is not thought that there was a competitive pitch for the business.

The agency is expected to work across both the food retail and restaurant strands of the business although details of the project have yet to be confirmed. Nando’s does not advertise regularly and in the past has used agencies on a project basis.

The South African restaurant chain launched in the UK in the mid-Nineties. It introduced its sauces range, including the core Peri Peri sauce, in the late Nineties as it began the national roll-out of its restaurant format.

Last year, the company launched an on-pack and direct mail promotion for its sauces range in a bid to boost brand awareness. It felt awareness of the sauces brand did not match that of the restaurant brand. The range includes cooking sauces, marinades and condiments.