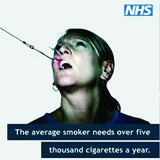 Research has found that oxytocin, which acts as a neurotransmitter in the brain, causes people to have more empathy towards issues raised in TV advertisements.

Participants at the Claremont Graduate University in California were given a spray of oxytocin to sniff, or a placebo, and then shown US and UK public service announcements about the dangers of smoking, alcohol, reckless driving and global warming.

They were then asked how they felt about the issues raised and given an opportunity to give some of the money they had earned from participating to the cause.

Those given the oxytocin spray said they felt an increased level of empathy and gave 56% more money to the causes advertised.

Paul Zak, the researcher leading the study, says: “Our results show why puppies and babies are in toilet paper commercials.”

“This research suggests that advertisers use images that cause our brains to release oxytocin to build trust in a product or brand, and hence increase.”

The findings were presented at the brain science and health conference Neuroscience 2010 in San Francisco.