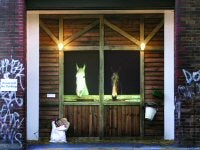 Christmas is a time when one’s thoughts turn to stables and beasts of burden, and their vital role in the nativity.

So it seems apt that Wieden & Kennedy has chosen the festive period to show off a rather nifty equestrian installation in the front window of its offices on Hanbury Street in London’s good old East End.

The interactive display, which was created in partnership with Human Beans, consists of a life-size projection of two horses leaning over their stable doors, watching the world go by.

There is straw, a bucket and a bag of grain outside their boxes – all the usual paraphernalia reminiscent of a traditional countryside farmyard.

The stars of the show, the grey and white Lotus M and a bay called Cover Girl, actually live in Hampshire and inspired Mickael Charbonnel and Ana Farias, the brains behind the installation, to come up with the novel idea of an inner-city stable.

The pair spent hours filming the horses relaxing in their stables, and the yard was created by designers Daniel Kupfer and Beck Rainford, who turned the footage into a full-blown interactive show which has proved a big hit with passers-by.

The effect is surprisingly soothing, and as our picture shows, some unsuspecting members of the public have been so completely fooled they have even tried to feed the animals.

And if you are unable to visit the virtual horses in person you can see them online at www.humanbeans.net/wkstables.

My father was the assistant editor of The Daily Record so the media was always prevalent during my upbringing. Then, by identifying a niche in the media marketing sector and combining it with my passion for football I created Match Day Media an idea formulated on the terraces of Old Trafford.

Red Brick Road has won the Gala Coral advertising account without a formal pitch. It is thought to be worth about £8m. It is understood that the gambling operator decided against a full pitch, instead appointing Red Brick Road after a strong first-round meeting with the agency, which launched a year ago. The agency will […]

He’s run three major meida organisations, but lost out on the top job at ITV. Some see Stephen Carter’s move to Brunswick PR as merely a holding job for a ‘professional chief executive’ who clearly still has much to offer, so what does the future have in store for him? By Catherine Turner.