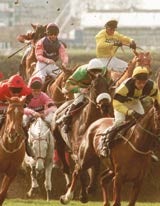 Martell Cognac might well have asked Grand National management to sit down and take a stiff drink last week before breaking the news the alcohol brand was ending its 13-year sponsorship of the steeplechase event (MW last week).

Martell’s withdrawal follows closely on the heels of another sponsorship loss for horseracing as television company Attheraces dropped the Gold Cup at Sandown this month. Other than gambling companies, the only major horseracing partner is now Vodafone, which sponsors the Derby.

Sponsorship will become an essential source of finance for the sport when the Horserace Betting Levy Board and the Tote, which both funnel revenue derived from gambling into the sport, are disbanded. The Levy is to be abolished in September 2005, while the Government is still looking at ways to privatise the Tote.

The industry has been left puzzled as to how a sport that generates hundreds of hours of TV coverage and countless column inches is struggling to compete with sports such as snooker and rugby for sponsorship money. Last year saw the largest racing attendance since 1959. The sport is the second most watched in the UK behind football, with dedicated coverage on Sky’s Attheraces channel, 260 hours a year on Channel 4 and a further 60 hours on the BBC.

A Channel 4 spokeswoman says its Saturday morning show attracts an average of 500,000 viewers, with afternoon coverage drawing an average audience of almost 1 million.

Viewing demographics are skewed to males in the North-west and Scotland but, according to Channel 4, there is also a significant following in ABC1 male and female viewers. Its appeal to wealthier consumers is evident at events such as Royal Ascot, while the sport also attracts a large audience in the Middle and Far East.

Such numbers, says Ben Pincus, chief executive of sports agency The Works, make considerable sense for global brand sponsorships. The reason behind the lack of major sponsorships, Pincus claims, lies with the racecourses.

“Racing does not present itself well to brands. The sport is outdated and needs to do more to attract sponsors.”

The sponsorship structure of the sport is also to blame. Each of the 59 racetracks is an individual rights holder, which means that most deals are to sponsor an individual race on a single day. Revenue from this low-level sponsorship can be paltry, with prices starting at &£600. Deals across racecourses and events are difficult to negotiate.

Mary Ann Sandercock, sponsorship executive of the Racecourse Association, which represents the racecourses, admits that sponsorship can be complicated. “Every course has its own team to find sponsors, and there are many different levels of sponsorship to choose.”

McDonald says: “Racing is fragmented. It is difficult to own the sport. Even the levels of recall for Vodafone and Martell are relatively low as they have just one event every year.”

There have already been attempts to create an umbrella competition. The British Horseracing Board (BHB), the sport’s governing body, developed a “Grand Slam” competition of four large races last year, although the tournament still lacks a sponsor.

Next year, the BHB hopes to launch a “Grand Prix” tournament of 24 of the best flat races. BHB marketing director Chris Ford says the sport is having a renaissance in audience figures and sponsors are again taking note. Ford says the BHB is talking to brewers, car and financial companies about the six sponsorship packages on offer.

However, previous attempts to create competitions for brands to sponsor have not been successful. Super 12 Racing, which represents the top racecourses, postponed the launch of its competition two years ago owing to lack of sponsorship interest (MW March 21, 2002).

Attheraces sponsorship manager Tom Earl has doubts over the single tournament approach and says it is almost impossible to become a headline sponsor of a series of races.

But Sandercock says it is crucial to attract big name sponsors through such events. With even Grand National venue Aintree struggling, the other 58 racecourses and 8,000 annual racing events in the UK are fighting for their lives. Issues such as the on-going investigation by the Office of Fair Trading into the BHB’s sale of media rights to the Attheraces-led consortium for &£307m in 2001 could ruin the smaller tracks. Racing sources say courses outside the top 12 would struggle to sell TV rights if the OFT negates the deal.

The BHB is aware it needs to boost the profile of the sport. The organisation has sponsored The Sunday Telegraph’s Racing Spirit Photography Challenge and the results will be in a dedicated 16-page section of The Sunday Telegraph magazine this weekend (MW last week). The BHB has linked up with the Daily Mail to give away guides to racing, an extension of the &£5.5m Discover Racing campaign launched in 2002.

There has also been a recent promotion with the horseracing-themed movie Seabiscuit, offering free entrance to a racecourse with the purchase of a ticket.

Such innovations may help the BHB, but it’s the development of an over-arching product to sponsor that will keep the sport in the saddle.