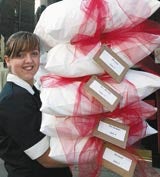 The scheme, which – somewhat ambitiously – claims to be “Scotland’s first pillow-sitting service”, says it will “lovingly look after the favourite pillow of regulars until their return visit”. That’s right, it won’t just be thrown in a cupboard, but “lovingly looked after”.

For those of you, like the Diary, who are worrying that you haven’t been giving your favourite pillow enough time or affection, this is apparently done by wrapping the pillow in tissue paper, name- tagging it, and storing it in a safe place which has the soothing sounds of panpipes played 24 hours a day.

The scheme was inspired when staff at the guest house noticed a customer regularly packing his own pillow with the luggage.

However, the Diary doesn’t find this behaviour so odd. It has regularly packed away a pillow case after staying at various hotels around the world. Only it is usually stuffed with complimentary toiletries, towels, bathrobes and the contents of the minibar.

Chorion, rights holder for Noddy, has signed a recording deal with BMG to release a series of singles featuring the children’s character. The first single, Make Way For Noddy, will be released on December 8.

The Independent Television Commission has cleared a Burger King ad showing a woman covered in bite marks, despite it attracting 83 complaints.

Large-format banner company Mega Profile has agreed a partnership deal with property company British Land to erect giant posters on properties under development or renovation. After Land Securities, British Land is the largest property company in the UK, and is one of the biggest landlords in the City. As well as owning offices, shopping centres […]