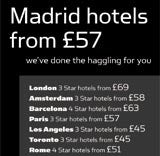 Outdoor and national press advertising is being rolled out from February and the company is preparing to bolster its presence in Europe, the Middle East and Africa.

Hotels.com launched in the UK in October 2003 with a campaign developed by Ogilvy Primary Contact, which was mainly online but also included London Underground and press advertising.

HTW’s appointment was made by marketing manager Matthew Walls and director of new channels development David Roche, through the AAR. Hotels.com is expected to appoint a marketing director in the next few weeks.

Walls was appointed just prior to launch and was previously European head of sales and marketing at KLM-owned low-cost airline Buzz (MW October 16, 2003).

The US version of hotels.com uses the strapline “Best places best prices guaranteed!” but Walls says that a new line will be developed for the UK.

IAC chairman and chief executive Barry Diller is planning to break up the group into two publicly listed US companies. Travel brands such as hotels.com and expedia.com will sit within a holding company called Expedia, while Ticketmaster and dating agency match.com will remain under the IAC banner.