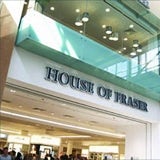 The department store is serving a series of mobile ads targeted by location, which direct users to its branches, in conjunction with O2’s mobile marketing arm O2 Media.

The campaign consists of SMS and MMS messages offering O2 mobile subscribers who have opted in to the O2 More scheme incentives to visit the chain’s outlets, such as gift cards.

Users are served with a unique discount code which they can redeem at their nearest House of Fraser.

He said one of House of Fraser objectives was to drive people to its 58 nationwide outlets during the weekends to promote awareness of its January sale.

“The messages have differed depending on the specific objectives of each weekend,” he says.

Separately, House of Fraser launched a mobile site at the beginning of the month that lets users browse and purchase items directly from their device.

It appointed development agency Usablenet to develop and launch the site following a 660% increase in mobile users visiting its website in the second half of last year.

House of Fraser’s CEO John King says online sales increased by over 120% in the run-up to Christmas but was unable to disclose how many customers were using their mobiles.