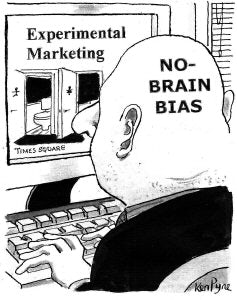 A lavatorial display in Times Square provides a clue to what really triggers a migraine – trying to explain the theories behind experiential marketing.

Sometimes it’s better not to ask. An inquiring mind is all very well in its way – without his, Einstein would have been just another physicist in need of a haircut – but it can leave you no wiser and give you a nasty headache.

I, for instance, have only just removed a wet towel from my head and come out of a darkened room following what began, innocently enough, in a spirit of inquiry.

I spotted an article in The New York Times about a display of lavatories in Times Square. The loos were placed there by Charmin, maker of what the Americans call “bathroom tissue”. The lavatories were not only used by thousands but also digitally photographed by thousands more, whose efforts were posted on the internet. Charmin’s dunnies were viewed by 7,400 Web users on one site alone. No wonder advertisers sat up and took notice.

“Experiential marketing, as the ad industry calls such campaigns”, explains The New York Times, “is intended to give people something they can try out and photograph.”

Experiential marketing, eh? Time to find out more. And that, my friends, is where I went wrong.

Turning to the internet, I resisted the urge to find pictures captioned “Elmer and me outside a cute bathroom in Times Square – posted by the Hackbackers of Wisconsin”. Instead, I went straight to the website of the International Experiential Marketing Association (IXMA). I wanted a definition of XM, as its practitioners call it. What I got was a quotation from the “seminal” book, Experiential Marketing, by Columbia Business School guru Bernd H Schmitt: “Today, customers take product quality and a positive brand image as a given. What they want is products, communications, and marketing campaigns that dazzle their senses, touch their hearts, and stimulate their minds – that deliver an experience.”

OK, so consumers are becoming ridiculously demanding, but how do you touch their hearts? Answer: none here. Time to look elsewhere. How about the website of Erik Hauser, the founder of IXMA?Straightaway, I found I was not alone in my thirst for knowledge. Hauser writes: “One reader e-mailed me last week, ‘I love what you’re saying, but you still haven’t explained experiential marketing.'”That sounded promising. I read on.

By now, I was beginning to feel like one of those customers whose senses had been dazzled, or rather partially fried.

For one, last try I turned to blogging marketer David Wolfe, who seemed to share my problem. He, too, had seen a definition of XM that cast as much light as a spent match.

“When I read experiential marketing defined as ‘a fusion of non-traditional modern marketing practices integrated to enhance a consumer’s personal and emotional association with a brand’, I thought the definition read a bit like bureaucratic prose,” he wrote – rather charitably, I thought. Seemed more like gibberish to me. He went on to provide his own definition.

“It seems to me that XM is a particular mindset rather than a system of marketing practices. After all, direct mail, point-of-sale purchase, programmatic product placement, broadcast communications, etc are as applicable to XM as to any other approach to marketing.”

That’s when the headache began…

“Importantly”, he added, “the idea of experiential marketing reflects a right-brain bias because it is about fulfilling consumers’ aspirations to experience certain feelings.

“In contrast, traditional product-centric marketing reflects a left-brain bias because it generally seeks to persuade consumers by invoking rational factors… a degree of rationality in consumers’ decision-making that contemporary brain science refutes.”

By now both the left and right sides of my brain throbbed with equal intensity. It was, I suppose, kind of experiential.

When BT was the only provider of telecoms in the UK, its ad campaigns got the nation talking. Mark Choueke discovers the company needs to regain its emphasis on memorable advertising

Should it be congratulations, or commiserations, to TBWA/London for winning the £25m European launch of Heineken’s non-alcoholic beer brand Fayrouz? The agency will no doubt earn every pound of the sizeable fee it has negotiated, and here’s why. The history of non-alcoholic beer brands and their promotion is not a conspicuously happy one. Lesson number […]

Retailers feel the ‘ouch’ in vouchers