Brands are keen to be seen as relevant and to understand what is important in consumers’ lives. Much like the World Cup, Eurovision or Valentine’s Day, the General Election is an opportunity for brands to muscle in on conversations people are already having.

“If your brand can seem ‘relevant’ to whatever else is going on in a consumer’s life, people seem to attach more value to it,” says Benedict Pringle, founder of politicaladvertising.co.uk.

“When a consumer is presented with a choice between two brands that they perceive as being similar, something as simple as an election gimmick might convince those interested by the political jamboree to choose one over the other.”

Paul Baines, professor of political marketing at Cranfield University, says: “This idea of tying into cultural events, the reason is for cut through, to try and be noticed. The thing about advertising is we don’t process most of it then when you really need a washing machine you suddenly realise how much washing machine advertising there is. Brands are trying to affect the filtering mechanism.”

However, there are pitfalls. Brands need to make sure they are adding value and that the message they are putting across is on-brand, particularly when getting involved in something as divisive as politics.

Jacques de Cock of the London School of Marketing says: “The polls say people’s relationship with politics is remote and essentially negative. Most brands don’t feel comfortable being associated with politics as there is very little brand benefit in the UK.”

B&Q made the leaders of the seven main parties into garden gnomes in a bid to encourage people to vote. They each launched their own ‘gnomifestos’ highlighting important issues such as how often to have barbecues and how to protect against killer hornets.

Gardeners on Facebook and YouTube were then asked to vote on who they wanted in power, while the retailer also ran mini-election events in stores.

The aim, according to B&Q, was to present the election in a light-hearted manner and get people thinking about who they want to run the country.

Pringle believes it will also have helped build B&Q’s “gardening credentials” and given “politicos an excuse to head to their local B&Q retailer”. 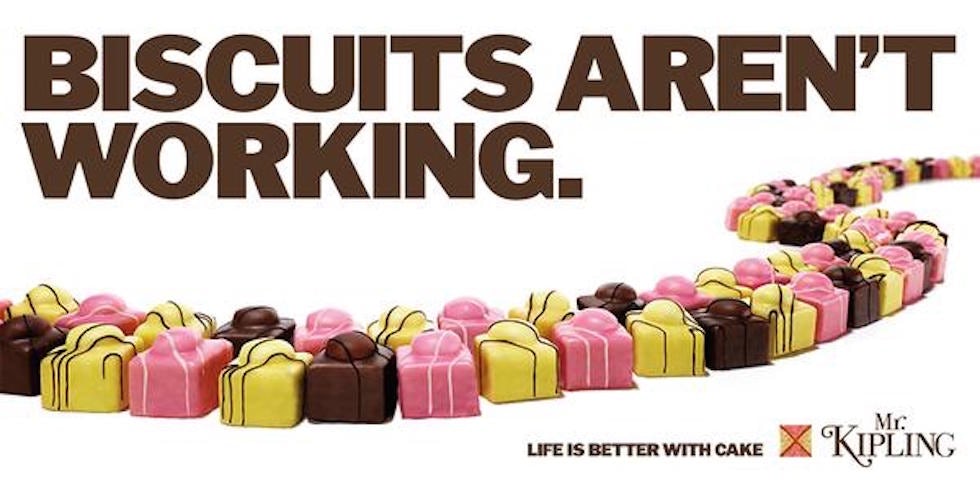 Mr Kipling is paying homage to the classic Conservative ‘Labour isn’t working’ campaign poster from 1978 as it tries to cut in on election hype. But instead of having a queue of the unemployed to highlight Labour’s record on jobs, we have French Fancies lined up to promote Mr Kipling’s latest ‘Life is better with cake’ message.

The campaign text has also changed to ‘Biscuits aren’t working’, while the tagline unsurprisingly refers to life being ‘better with cake’ as opposed to the Conservatives. 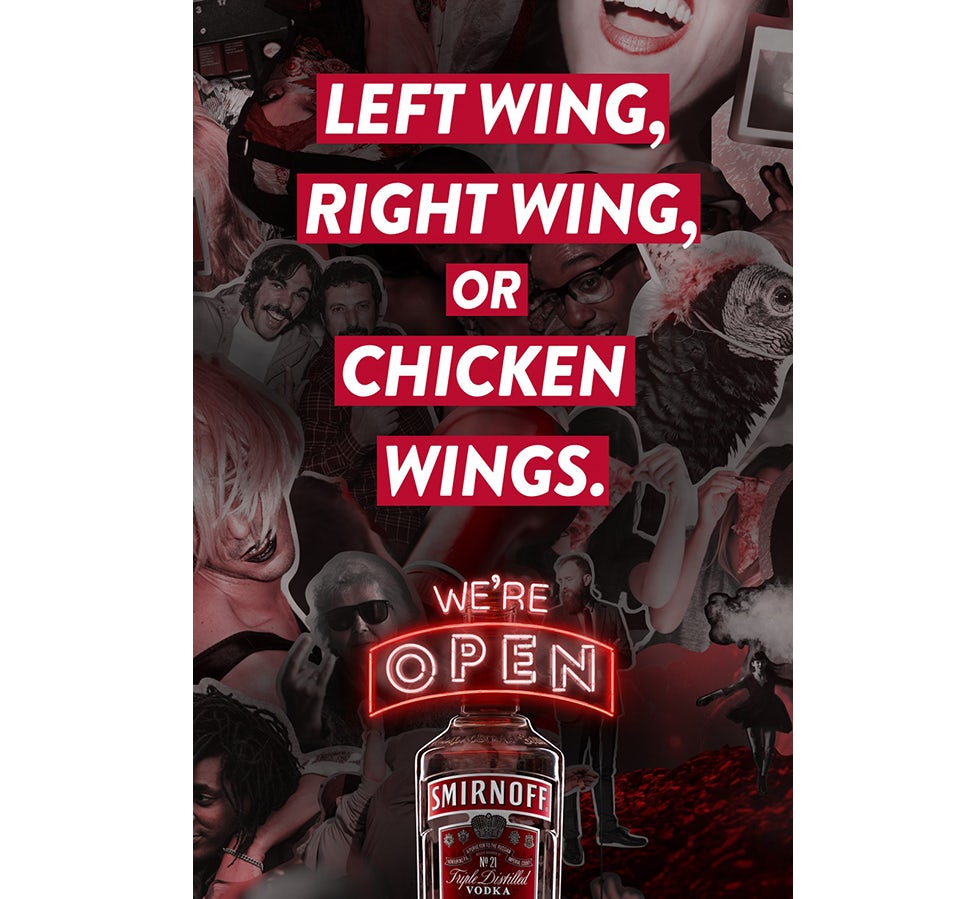 The link between vodka and voting may not be all that clear, but that hasn’t stopped Smirnoff using the General Election to kick off its latest marketing campaign as it aims to become “more always on and present in culture”. The £4.5m “We’re On” campaign will appear outdoors and in print aimed at promoting the brand’s inclusive positioning in Great Britain and Ireland.

It kicked off yesterday (5 May) with ads around the General Election showing that no matter whether people are “right wing or left wing” Smirnoff is still for them.

Dan Hatton, marketing manager at Smirnoff, told Marketing Week the campaign will continue after the election with proactive planning around popular culture conversations such as Eurovision Song Contest.

However Baines is cautious on the success of tying in with the General Election. While Smirnoff is trying to pitch itself as “inclusive”, its audience is likely to be a younger demographic that is less engaged with politics, he says. 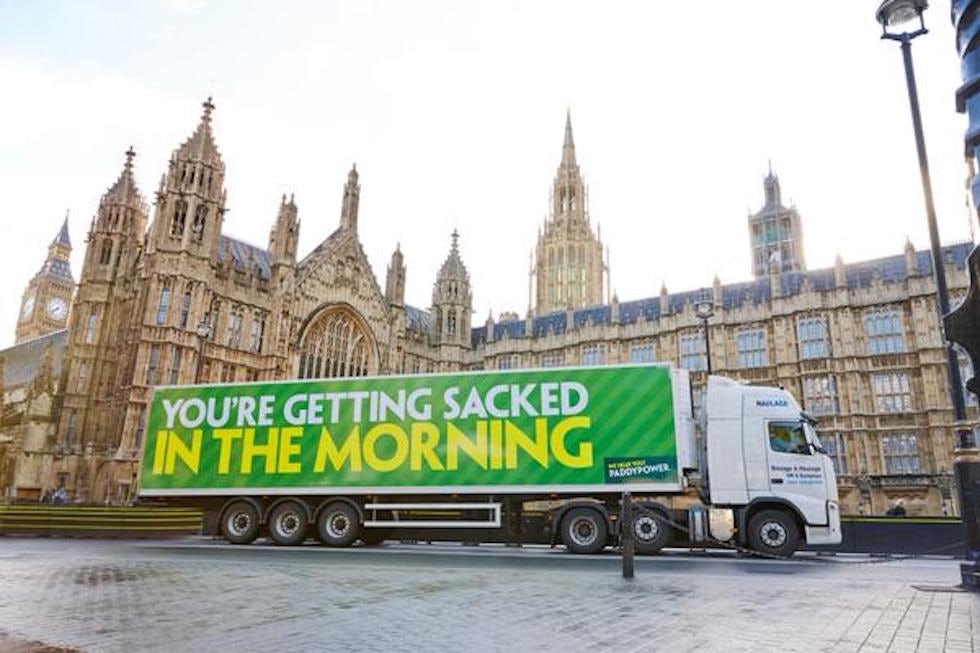 Paddy Power not only wants you to vote, it wants you to put your money where your vote is and take a gamble on the likely outcome of the election.

The latest stunt is to drive a lorry bearing the message “You’re getting sacked in the morning” – popular among footballs fans – to Westminster and park it outside Parliament. It also promoted the exploit on its social channels.

Baines says the line fits with Paddy Power’s image as irreverent, as well as with the “negativity and malaise” the general population has for the election.

“It shows Paddy Power understands people’s feelings. It will cut through because its irreverent and humourous and works well as part of an integrated marketing campaign because it sends a signal for people to bet on the outcome,” he adds.

At the time of writing it is offering both David Cameron and Ed Miliband odds of 10/11 on being the next Prime Minister.

Channel 4 is planning to turn off its youth channel E4 for the day on polling day as it looks to encourage young people to vote. Those aged under 25 are some of the most unlikely to vote, with a recent study by Voxburner finding that 86% of those aged 16 to 24 would disagree with the statement ‘politicians understand my world’.

Less than half of that demographic voted in the last election, compared to around more than three-quarters of the over 70s.

Channel 4 CMO Dan Brooke said the broadcaster is “engaging the most powerful weapon we have at our disposal to try and boost that number” by “switching off their favourite TV channel”. The move is being backed by a TV campaign featuring a man called Darren who is usually responsible for keeping E4 on.

On election day viewers will see Darren in the control room rather than the usual programming. 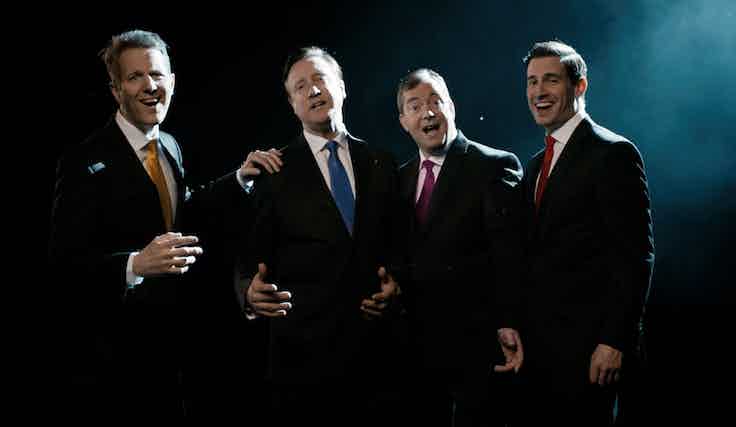