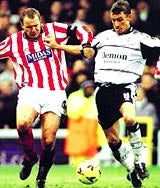 The article “Perfect pitch” (MW March 29) was shown to me as my company is one of those that has had a box at Fulham Football Club, on and off, since the days of Ernie Clay.

I am not sure why the fact that a great number of boxes at Fulham are taken by local companies run by people who support Fulham is believed by you to be “an interesting problem”. Surely it demonstrates the loyalty shown by these people to the club as they have returned every season despite the fact that some of the football on the pitch in recent years has been, to put it kindly, appalling.

When Fulham were second from bottom of the Third Division – the lowest point in the club’s history – companies such as mine still renewed their boxes and not many clubs can boast such loyalty from their boxholders. The only time, for example, that my company did not have a box was during the time that I was member of the Board of Directors (1987 to 1990), when we had seats in the Directors Box.

Fulham FC should be proud of the support shown by their boxholders and the loyalty shown during the bad times. Their reward is long overdue and will start next season when the club plays in the Premiership.

Presumably the sales department want the big corporate bodies to get involved as they have much larger budgets for entertaining, thus in theory bringing more revenue to the club. But, will these people be there should Fulham drop down the leagues once again and the highlight of the season is a match against Brentford or Rushden &amp; Diamonds? The loyal supporters will be there however – the very ones who have continued to renew their boxes every season for a number of years now.

When the new stadium is built, I hope that the executive boxes will be upgraded as the current boxes are basic to say the least. This is particularly relevant as far as the ones at the back of the Riverside stand are concerned as they were built some 25 years ago.

Ross Hutchinson does an extremely good job at Fulham given the limited resources he has to work with. I hope the new stadium will give him greater scope for the future.

We boxholders may be “interesting” but we do not think that we pose a “problem” to the development of Fulham FC.

Cigarette-vending machine operators are preparing a legal defence to European Union (EU) plans which could see the machines banned across the continent. The European Commission is preparing research, to be finalised next year, to establish whether cigarette vending machines give under-age smokers easier access to cigarettes. The commission has confirmed that, if the research finds […]

Broadband access is the new black for the digerati, with its potent promise of film-standard streaming and full interactivity. Yet, if it is ever to catch on, it will have to fulfil at least two vital requirements. First, a glamorous application to drive it into the living room; and second, in the UK at least, […]