Trust in the voice of authority is fading as consumers increasingly put their faith in each other. Messages from businesses, politicians and tabloid newspapers are being listened to with a sceptical ear.

The economic crisis has caused a seismic shift in attitude according to data, exclusive to Marketing Week, from Opinion Leader, part of Chime Research and Engagement Division. Consumers are now entering what the company calls the “age of emotional proximity”, where peer recommendations surpass all other marketing.

Viki Cooke, co-founder at Opinion Leader and joint chair of the Chime Research and Engagement Division, says the research charts the change in the way consumers listen to and value other people’s opinions.

“We have moved on from a place where we automatically respected our elders and betters to one where we trust friends and family first and foremost.”

Cooke says the shift from deference (people accepting what they are told) to reference (asking advice from peers) has been developing since the trust study first took place in 2002.

Back then, trust in both businesses and government was low, with people citing TV hosts Richard and Judy as more trustworthy to provide facts on the MMR vaccine than then health minister Alan Milburn.

“This has moved on again and accelerated as the internet has grown,” says Cooke.

The unravelling of financial institutions has resulted in a wider loss of confidence, not just of the City but of other businesses too. The majority of the public (73%) and opinion leaders (85%) agree that “bad management in a variety of business areas has increased mistrust”.

It appears we are not even buying into celebrity endorsements any more. While stars are still rated as more trustworthy sources of information than “leaders”, the glut of reality TV “stars” that have invaded viewers’ screens has lowered opinions of celebrities.
Cooke says some retailers have now moved away from big names fronting ad campaigns. She cites Marks & Spencer as an example. The retailer is scaling back its use of celebrities in advertising campaigns and has dropped Elizabeth Jagger, Erin O’Connor and Lily Cole from future campaigns in favour of a greater emphasis on promotional discounts.

“M&S has really shifted [its marketing strategy] from last year, when people were critical of its big razzmatazz Christmas ad campaign,” says Cooke. “Big celebrity promotions are not in tune with what people are looking for.”

She adds that the current economic climate has made it more difficult for consumers to relate to the lifestyles of stars. “Celebrities as a group of people that you can relate to has really shifted and they have moved down the pecking order in terms of being trusted.”

The likes of TV hosts Richard and Judy are still admired for their opinions, but consumers are questioning the point of celebrities such as Paris Hilton, heir to the Hilton Corporation, who is well known on the party circuit.

Brands need to be more astute if they use a celebrity face as a promotional tool because if it doesn’t fit with the values it could weaken the impact of the message, according to Cooke.

She argues: “People have become much more sophisticated in the way they think about celebrity endorsements, and brands need to think carefully before signing up a star name.”

An example of this trend can be seen in the recent questioning by shareholders whether the use of A-list celebrities in an £80m campaign was an appropriate way for Aviva insurance to promote its name change from Norwich Union.
Cooke says brands should focus instead on the trend of peer-to-peer “proximity” to get their messages across. Online brands have already found ways of doing this effectively, she argues.

Both eBay and Amazon promote through recommendations. Cooke says: “It’s clever marketing but it gives you a sense that you are hearing from people like you.”

Consumers are still putting most of their trust in the opinions of their friends and family but they also put faith in friends of friends and family, who they consider to be “people like us”. Even opinions on forums and social networks are seen as trusted sources of information.

This trend has been accelerated by the rapid growth of the internet and increasing popularity of social networking. For consumers, gathering the opinions of people only loosely connected to them is now simpler than ever. Websites like Tripadvisor publish the views and photos of people’s travels to help those about to book a holiday make a decision.

But Cooke warns consumers want to know that opinions are honest and not just marketing spin. She says: “We now trust friends of friends and family, who we know don’t have a vested interest in the outcome.”

Authenticity is one of the fundamental reasons why peers are a trusted source of information and marketers must tap into this trend about being authentic in order to maintain good terms with customers. Cooke advises: “Identify your customer advocates or customer champions, encourage them to talk to each other and refine your own thinking and ideas so you appear to be walking in your customers’ shoes.”

Familiar household names are ideally positioned to capitalise on trust by combining reliability with a lack of vested interest. If a product has been around for a long time, it becomes “like a friend” and has a reputation for meeting consumers’ needs even in a tough economic climate.

But this doesn’t mean that newer brands have to sit back and patiently wait for trust to build. Cooke says younger brands are finding ways of becoming a familiar face in everyday life. “Google is incredibly clever because it feels like it is your friend. It’s such an easy way of getting information. People’s perceptions are that it is accurate and transparent. It’s like an extension of your brain and it does it in a very intuitive and easy to understand way.”

Most important of all for companies, however, is making sure that they correctly assess the consumer mood and tailor their offer to suit this. “Now is the time to get out there and be a part of people’s lives and empathise with them. The difficulty is anticipating how the mood will change,” says Cooke.

Simon Parslow
founder of online retail site eSay-uk.com
Peer-to-peer endorsement and celebrity endorsements both have their benefits. Celebrity endorsement is still seen as a sign of being aspirational, as you want to be like those people that you adore. If you and your friends can be one step closer to sharing that experience and also agree with each other that it’s a good product, then all the better. For brands to hold up their brand value, word-of-mouth or conversational marketing is a better way of getting them across to people. What the recommendation from a peer does is answer a lot of questions that a shopkeeper or advert can’t explain.

Matt Walls
director of marketing at online travel booking company Hotels.com
It used to be true that people would look at the pictures then look at the prices and that would be enough. The importance of peer reviews or “people like me” in reviews is pretty vital to our business. Generally, people have a healthy degree of scepticism about what marketing people write but trust what their peers write. This is the information that drives decision making.

Stephen Davis
head of brand marketing and research at travel company Expedia.co.uk
Travel is an emotive subject and people like to share their experiences. It creates a dialogue, rather than a monologue, with consumers. People do trust businesses but only to a certain degree – it’s good to have an independent qualification and that’s what our customers look for. It’s about looking for further reassurance, especially when the cost of a holiday is several hundred pounds.
Word-of-mouth communications has always been important. Frankly, it’s a cheaper way of getting a good message to consumers than doing it via paid-for advertising channels – if you can get across the message in a genuine way. 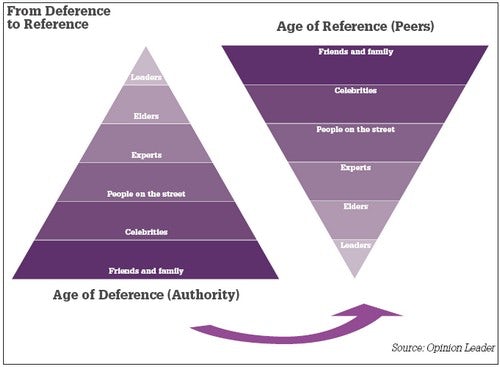 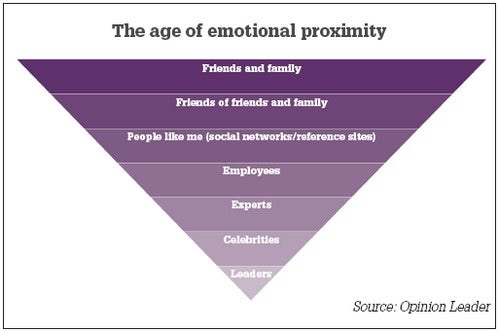 The Digital Radio Development Bureau is to launch its first retail promotion campaign in the summer in a bid to boost DAB listenership.

The Advertising Standards Authority has decided to investigate the campaign for Unilever’s male body spray Lynx Bullet after the watchdog received a flurry of complaints that the ads are sexist and degrading to women. The watchdog is to formally look into the 40 complaints after the ASA Council decided there are further grounds for investigation. […]

Yell, the international directories company, has launched a new service aimed at helping small to medium businesses promote themselves on search engines such as Google and generate additional sales leads. The Search Marketing Service is being targeted at small businesses which do not have the time or expertise to set up and manage such a […]